Description:
New York: Seth Moyle, 1913. First edition. Hardcover. No DJ.
Hardcover in tan and buff cloth lettered and decorated in dark brown. 215 pp.
With four full page illustrations by Franklin Booth. See pictures to evaluate condition and let me know if you require more pictures. The first collection in book form (previously appeared in McClure's Magazine) of letters Confederate General George Pickett wrote to his fiancee and eventual wife La Salle Corbell, during the Civil War. The letters begin with an explanation of why he sided with the South, comment on battles, an expression of presentiment written the night before he was wounded at Gaines Mills, his promotion to Major General. He warned her to leave the dangers of the war zone; commented on Gettysburg; commented on the birth of their son; wrote a letter a few hours before Appomattox. The concluding section contains material from after the War.
Item Price
$38.75
$3.25 shipping to USA 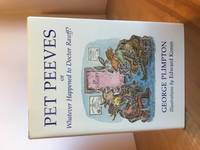 Description:
First edition , 1st printing with full number-line on copyright page.This is a vintage book which will have signs of wear, sometimes significant to the boards. Pages will always be intact with minimal to no stray marks or marginalia, unless otherwise noted. Books may have an owner or gift inscription. Prior to bidding, please inspect pictures closely to ensure you are confident in what you will be getting.
Item Price
$27.00
$3.25 shipping to USA