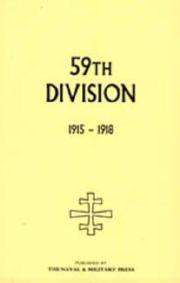 Description:
(Subject: Regimental & Unit Histories - General) The 59th North Midland, a Territorial division, was formed in January 1915. It served in Ireland following the Easter Uprising in April 1916. In March 1917 it was sent to France, serving on the Western Front at Ypres, Cambrai, St Quentin, Bapaume, Baileul and Kemmel Ridge during the German offensive on the Lys, Amiens and in the final advance in Artois and Flanders. This account describes brigade operations against Sinn Fein in Dublin, examples of acts of gallantry, plus a summary of the divisional record from formation to armistice. Also includes a table of the divisions movements and locations. (Published: 2004) (Publisher: Naval & Military Press) (ISBN: 9781843429944) (Pagination: 186pp + 35-page supplement, 9 b/w photos, 3 maps.) (Condition: New in card cover) UL-XXXXXX
Item Price
$31.84
$27.69 shipping to USA

Description:
(Subject: Regimental & Unit Histories - General) This is the story of the seven regiments which compose the Household Division, commonly referred to as the Guards. The image of the Guards has been coloured by their ceremonial duties as the regiments dedicated to the protection of the sovereign - whether on duty at Buckingham Palace or at great national occasions such as The Queen's Birthday Parade known as the Trooping of the Colour. Yet in the 21st century they have never been more active and engaged in their role as highly effective operational military units, whether in Bosnia, Iraq or, more recently, Afghanistan. This book offers a true, wide-ranging colour portrait of the Household Division. With a Preface by Her Majesty, Queen Elizabeth II. (Published: 2008) (Publisher: Third Millennium) (ISBN: 9781903942680) (Pagination: Large format, 208pp, c600 colour photos & illustrations) (Condition: New in d/w) UL-XXXXXX
Item Price
$43.34
$27.69 shipping to USA

Description:
(Subject: Intelligence, Espionage, Reconnaissance & Electronic Warfare) 'Dora' was the codename of the leader of a vitally important link in the Soviet intelligence network operating in Europe during the Second World War. Under cover of running a cartographical agency in Geneva, the author was able to build up a group which, at its best in 1942, had three transmitters providing Russia with information on German troop positions, movements and losses, the state of the armaments industry and strategic plans. This book provides a fascinating first-hand insight into the difficulties and dangers faced by intelligence agents, their dedication, and the day-to-day running of an extremely successful branch of the Soviet Union's 'Red Orchestra'. (Published: 1977) (Publisher: Abelard & Schuman) (ISBN: 0200723391) (Pagination: 298pp) (Condition: fair in discoloured d/w. probably ex-library) UL-XXXXXX
Item Price
$13.03
$27.69 shipping to USA 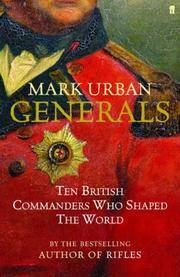 Description:
(Subject: History & Development of Warfare - General) The story of ten exceptional soldiers who left their mark on Britain and the world. Some, like Wellington, Kitchener and Montgomery, are names etched in the national mythology. Others are obscure figures whose achievements or failures may have had consequences quite different to those they had intended, from the creation of the United States of America to the invention of Blitzkreig. All ten of the Generals revealed either a brilliant ability or a fatal flaw. While one became a Prime Minister, another was beheaded. Success or failure depended largely on their ability to work within Britain's Parliamentary democracy and against tyrants, despots and emperors who were often free to act alone. (Published: 2005) (Publisher: Faber & Faber) (ISBN: 0571224857) (Pagination: 336pp, 27 colour & b/w illustrations, maps, index) (Condition: Slight fading on spine) UL-XXXXXX
Item Price
$11.58
$27.69 shipping to USA

Description:
(Subject: Post World War II - Northern Ireland) Covert operations in Northern Ireland, 1976-1987. The book covers the role of British Army undercover units, RUC Special Branch, MI5 and MI6. It is based on research, interviews and discussions with those at the heart of intelligence and special operations in Ulster at the height of the so-called 'Troubles'. (Published: 1992) (Publisher: Faber & Faber) (ISBN: 057116112X) (Pagination: 266pp illustrations) (Condition: Good in worn dw) UL-XXXXXX
Item Price
$23.16
$27.69 shipping to USA 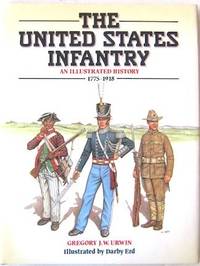