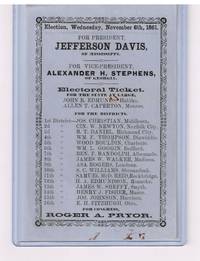 Description:
On November 6, Davis was elected to a six-year term as established by the Confederate constitution. He remained president until May 5, 1865, when the Confederate government was officially dissolved.
Offered here is a very scarce voted ballot for Jefferson Davis as Presidency, and Alexander Stephens, as VP of the Confederates States of America. It is dated Nov. 6th, 1861, and signed on the back by the voter. This ballot is in vf condition, with no visible defects.
Item Price
$500.00
$3.00 shipping to USA