Description:
London: Faber, 1967. First Edition. 8vo, pp. 165. Name on end paper, a very good copy in little worn dj. Vaizey is an economist and seeks to "consider whether education is "an investment in human beings" and what its returns are.
Item Price
$28.00
$6.00 shipping to USA

Description:
NY: Macmillan, 1912. Reprint of 1910 edn. 8vo, pp. 298. Illustrated. Frontis picture loose, owner's bookplate on pastedown,slight foxing in front, o/w VG. Especially discusses the various breeds common in the U.S. at the time, with photos of many of them. covers raising chicks, and various types of housing.
Item Price
$17.00
$6.00 shipping to USA

Description:
Paris, 1930. 10 issues: 7, 10, 11, 13, 15 (covers worn), 16, 19 (covers worn), 24, 25 + the index volumes from 1924-1928 (covers worn). Except for the two with worn covers, the other eight are fine in original tissue. Issues were limited to 3000 numbered copies. Ambroise Paul Toussaint Jules Valery (1871-1945) was a French poet, editor and critic. While studying for his law degree, Valery met Pierre Louys and Andre Gide and with them began attending Mallarme's salons. He was interested in the processes of the creative mind and created sketches that became his important Monsieur Teste. He was elected to the French Academy in 1925. This includes work by a wide variety of progressive poets of the time. Besides the editors included are: Antoine Artaud, Vitrac, Edith Sitwell, Roger Fry, Virginia Woolf, Neitzsche, Andre Breton, Liam O'Flaherty, T.S.Eliot, T-F Powys, Jean Giono, Ossipe Mandelstam, Andre Gide, Henri Michaux, William Faulkner and others.
Item Price
$330.00
$6.00 shipping to USA

Description:
NY: Dutton. First Edition. 8vo, pp. 262. Illustrated with photos. VG copy insribed by the author: "To Harry Chaffin | in appreciation for the work at Dutton" ... " also inscribed: "likewise I say how do you do Harry. Elliott B Macrae" (President of Dutton). An autobiography.
Item Price
$110.00
$6.00 shipping to USA 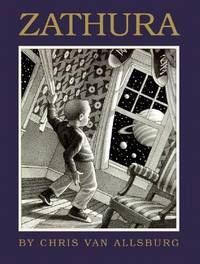 Description:
Boston: Hourghton Mifflin, 2002. Fourth printing. Van Allsburg. 4to, pp. not numbered. Illustrated by the author. Paper over boards with a cloth spine. About as new in dj. A story book with large black-and-white illustrations.
Item Price
$40.00
$6.00 shipping to USA

Description:
Boston: Houghton Mifflin, 1983. Fourth printing. Horizontal 8vo, pp. not numbered. Illustrated by the author. A VG tight copy in somewhat chipped and scuffed dj. A story about a boy who sails his boat in the sky. Basically a picture book.
Item Price
$13.00
$6.00 shipping to USA