Description:
Chatto & Windus, London., 1943. First edition. Octavo. 60 pages. The author's second collection.Presentation copy from the author, inscribed on the front free endpaper: ''For Demetrios with best wishes from Peter Yates- November 1943.'' The recipient is the Greek poet Demetrios Capetanakis. Laid in is an Autograph Letter Signed by the author and on his headed writing paper dated November 19th 1943: about 100 words presenting the book and mentioning John Lehmann who had published both writers in the June 1943 issue of his New Writing and Daylight. Capetanakis has marked in pencil several sections of the long title poem.Spine faded. Very good. No dustwrapper.
Item Price
$61.47
$10.93 shipping to USA

Description:
The Cuala Press, Dublin., 1971. First edition. Small quarto. One of 300 copies. Introduction by Anne Yeats. Title-page and 8 full-page illustrations by Jack B. Yeats, all of which have been hand-coloured. Full blue linen with pictorial title-label on upper cover. The illustrations date from 1909-10. Fine. No dustwrapper issued.
Item Price
$512.29
$10.93 shipping to USA 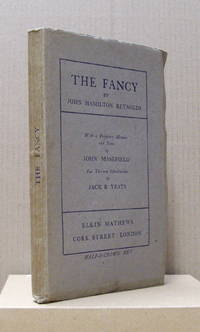 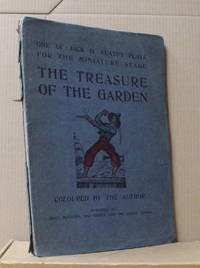 Description:
Elkin Mathews, London., [1902]. First edition. Quarto. pp [16] + 7 plates, [2] adverts. Original blue pictorial wrappers. A play for the miniature stage.The seven woodcut plates and the cover illustration are all hand-coloured by the author. On the front cover is printed the statement, ''coloured by the author'', but in fact by far the greater number of copies were issued with no colouring.Spine split which means the covers have separated. Very good. All plates clean and bright.
Item Price
$1,707.63
$10.93 shipping to USA

Description:
Macmillan, London., 1965. Reprint of the second edition. Octavo. pp xvii, 565. From the library of Richard Strachey with his armorial bookplate on the front pastedown and his Oxford address written on the front free endpaper. Richard was Lytton Strachey's favourite nephew. Very good in good, slightly nicked and creased dustwrapper defective at head of spine.
Item Price
$61.47
$10.93 shipping to USA 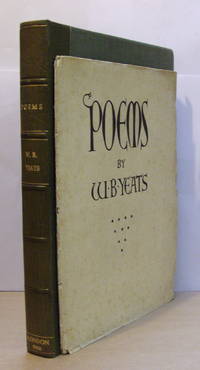 Description:
''Form'', London., 1916. First edition. Quarto. pp [24]. Title-page, titles of poems, initials and full-page silhouette of a naked woman by Austin Osman Spare all printed in red. Wrappers. Out of a total edition of 200 copies this is one of 122 printed on Italian hand-made paper.Covers rubbed at the edges, splitting at the spine and spotted. Good. Housed in a custom-made clamshell cloth box with green morocco spine.
Item Price
$1,297.80
$10.93 shipping to USA

Description:
Elkin Mathews, then Elkin Mathews and John Lane, London., 1892;1894. First editions, these being the large paper copies, 50 of which were printed for the first volume and 70 for the second. Octavo. Two volumes: pp xvi, 94; xvi, 136. Period bindings of full red morocco with raised bands, that of the first volume being by Bickers and the second by Morell (despite which, they match perfectly). As well as Yeats, contributors include Ernest Dowson, Lionel Johnson, Richard Le Gallienne, Victor Plarr, Ernest Rhys, Arthur Symons, et al. These were the Club's only anthologies. It continued to hold its informal meetings, with a somewhat opaque membership, until 1904.On each front pastedown is the pictorial bookplate of Edward S. Sullivan. Some foxing to prelims and a little surface abrasion to covers. A very good set indeed, and scarce in the large paper issue.
Item Price
$5,122.88
$10.93 shipping to USA

Description:
Macmillan, London., 1928. First edition. Octavo. pp vi, 110, [2] adverts. 2000 copies printed. One of the greatest poetry titles of the twentieth century, this collection shows Yeats entering his mature period and includes poems such as ''Sailing to Byzantium'', ''Leda and the Swan'', ''Nineteen Hundred and Nineteen'', etc. 110 pages. Elaborate gilt decorated cloth by T. Sturge Moore, depicting the eponymous tower in which many of these poems were written.On the front pastedown is the bookplate, with a design by Jack B. Yeats, of the noted Yeats collector Milton McGatch.Head and tail of spine faintly scuffed. Near fine. No dustwrapper.
Item Price
$1,024.58
$10.93 shipping to USA

Description:
Elkin Mathews, then Elkin Mathews and John Lane, London., 1892;1894. First editions. Small octavo. Two volumes: pp xvi, 94; xvi, 136. At the rear of the second volume is a 16-page publishers' catalogue dated 1894. As well as Yeats, contributors include Ernest Dowson, Lionel Johnson, Richard Le Gallienne, Victor Plarr, Ernest Rhys, Arthur Symons, et al. These were the Club's only anthologies, printed in editions of 450 and 650 respectively. It continued to hold its informal meetings, with a somewhat opaque membership, until 1904.First volume: short tear to fore-edge of title-page; free endpapers lightly tanned; spine label a bit dull; very good in the original glassine dustwrapper which is torn and chipped. Second volume: on the front pastedown is the bookplate of Patricia Milne Henderson; very good indeed; no dustwrapper.
Item Price
$3,073.73
$10.93 shipping to USA

Description:
Macmillan, London., 1933. First edition. Octavo. pp x, 101. 2000 copies were printed. Cover design by T. Sturge Moore in blind on front cover and gilt on spine. Contains the "Crazy Jane" poems. With the erratum slip tipped in at p.85. Fine in near-fine dustwrapper, repeating the cover design, with a fingernal-size chip at the tail of the spine.
Item Price
$2,288.22
$10.93 shipping to USA