Description:
(London, Hodder and Stoughton, 1890, First edition). 8vo; original olive cloth gilt; pp. viii + 488, incl. index; tissue-guarded frontis. portrait; folding map. Boards somewhat spotted, bumped, and worn at extremities; hand-stamp on verso of frontis. Very good internally; good condition overall. The biography of Alexander M. Mackay, pioneering missionary to Uganda, written by his sister. "I take this powerful body of native Christians in the heart of Africa - who prefer exile for the sake of their faith to serving a monarch indifferent or hostile to their faith - as more substantial evidence of the work of Mackay than any number of imposing structures clustered together and called a Mission station would be." - Henry Morton Stanley. .
Item Price
$30.85
$14.62 shipping to USA

Description:
(Cape Town: South African Library, 1995) 0869681133. South African Library General Series, Number 23. 210 x 147 mm; pictorial wrappers; pp. 94, incl. index; contemporary illustrations in text. Lower cover very slightly rubbed. Very good condition. "Ann Hamilton, as the wife of a missionary artisan, was not expected to be more than an assistant to her husband, and when she tried to establish a wider field of activity for herself, she speedily incurred the powerful and effective hostility of both Dr Philip and Robert Moffat. ... [Her] life ... with its limitations and frustrations ... is to be regarded as typical of the lot of women on the mission field in the early nineteenth century". .
Item Price
$30.85
$14.62 shipping to USA 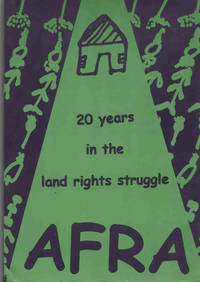 Description:
(Pietermaritzburg, Association for Rural Advancement, 1999). 244 x 169 mm; laminated wraps; maps; tables; monochrome illustrations in text. Corners of cover very slightly curled. Very good condition. "AFRA came into being amidst the organisational bannings and deaths in detention that marked South Africa after the Soweto revolt. Memory was one of the first weapons of the organisation - its connection to a tradition of resistance to forced removals in Natal by the Liberal Party and the African National Congress until both these bodies were suppressed in the Sixties. From 1979 till now, AFRA has re-established a practice of resolute opposition to injustices perpetrated against rural people and, with growing confidence in post-apartheid South Africa, participation in the fight for a better life for all in rural areas. It intends to continue that work, though this time, it is hoped, in a stronger partnership with government and other parts of civil society." .
Item Price
$18.51
$14.62 shipping to USA

Description:
(Cape Town: Struik, 2001) 9781868726295. 280 x 215 mm; laminated pictorial wrappers; pp. 153, incl. index; line drawings; colour photographs. Fine condition. "This comprehensive guide to vegetable gardening in South Africa, written specially for the home gardener, is based on practical experience and intimate knowledge of local growing conditions. ... The text is complemented by colour photographs and over 200 line drawings, many of which illustrate the more important or unusual cultural practices described by the author. Whether your garden is a smallholding or a townhouse patio, The A-Z of Vegetable Gardening in South Africa is an essential handbook containing everything you need to know for the successful production of your own top-quality vegetables throughout the year." .
Item Price
$8.02
$14.62 shipping to USA

Description:
(Cape Town: Howard Timmins, 1962). 8vo; original pictorial papered boards; pp. 126, incl. index; line drawings as head-pieces. Covers tanned and foxed, with slightest trace of fishmothing; backstrip a little frayed at ends, with archival tape repair to tail; edges of boards a little rubbed and soiled; earlier owner's name signed on front pastedown; some foxing to edges and endpapers, occasional fox spot elsewhere. Good working copy. "The author, born in Norway, a fish eating country, is famous for her knowledge of fish dishes and the object of this book is to make the public aware of the importance of making more use of our cheapest form of protein - fish - and to guide housewives in its preparation. ... There are a great number of recipes for all types of fish found in South African waters, including a number for fresh water fish. One of the most interesting sections is that on fish soups, practically unknown in our country. Fish aspics, those delicious hot weather dishes are hardly… Read More
Item Price
$9.25
$14.62 shipping to USA 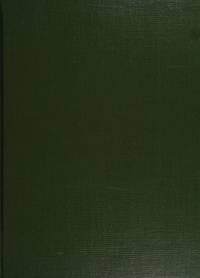 Description:
(Cape Town: Struik, 1984) 0869770578. 4to; original brown boards, lettered in white on spine and upper cover; pictorial dustwrapper; pp. 184, incl. index; map; profusely illustrated with photographs in monochrome and full colour. Dustwrapper ever so slightly rubbed and a little foxed to reverse, with discreet archival tape repair to reverse of edge-tear. Very good condition. "Strictly speaking, the tribal people of Southern Africa have ceased to exist: so much is changing, so much has already been lost. Dr Martin West and Jean Morris have collaborated to create an image in words and pictures of what remains of the traditional African way of life in South Africa. All the major groups are described; their customs, rituals and dress are shown and the meanings discussed. This is a record of a way of life centuries old but now, inexorably, drawing to an end. It may well be that at some point in the future, all that will remain of this proud heritage will be its oblique reflection in the new… Read More
Item Price
$12.34
$14.62 shipping to USA

Description:
(Langlaagte: Die Abraham Kriel-Kinderhuis, 1932). Squarish 8vo; original red cloth, lettered in gilt on spine and upper cover; dustwrapper; pp. (viii) + 173; photographs. Dustwrapper edgeworn, sunned on spine panel, and somewhat rubbed; previous owner's named signed on front free endpaper and Contents page. Very good condition, in a fair dustwrapper. Afrikaans text. (Nienaber I, p. 180) Abraham Paul Kriel (1850-1928) was a minister, "particularly remembered as the founder of the large orphanage which today bears his name ... He did a great deal in particular for mission work, evangelisation and poor-relief. He appointed the first social workers under the supervision of the [Dutch Reformed] church council and bought a hotel which he converted into a youth hostel. While on a visit to Europe he acquainted himself with the orphanages of George Muller in Bristol and of Quarrier near Glasgow as well as with Bodelschwingh's institution for epileptics at Bielefeld, Germany." - DSAB… Read More
Item Price
$9.25
$14.62 shipping to USA 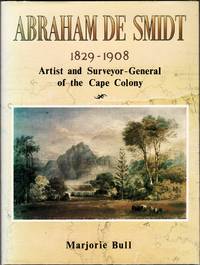 Description:
(Cape Town: the author, 1981) 0620049170. Small 4to; original black boards, lettered in gilt on spine; laminated pictorial dustwrapper; pp. 164, incl. index; colour plates after De Smidt's paintings; numerous monochrome illustrations in text. Dustwrapper's spine panel sunned; earlier owners' bookplate (Faith and Walter Middelmann) to front pastedown. Near fine condition. "De Smidt was a topographical draughtsman of the first order and many of his picturesque South African landscapes and panoramic views reflect his arduous journeys as a surveyor. His works are imbued with romantic sentiments largely as a result of an early visit to Europe and the appeal of the sublime grandeur of Switzerland, and he was a keen painter of scenes in England, Scotland and Wales. In this book there is a catalogue of paintings known to the author, of which 26 are reproduced in colour and 30 in black and white. There are a further 47 illustrations in black and white." .
Item Price
$61.70
$14.62 shipping to USA 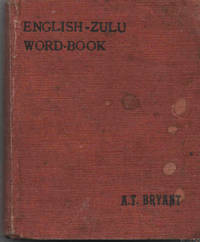 Description:
(Mariannhill Mission Press, 1945). 16mo; original reddish cloth, lettered in black to spine and upper cover; pp. 475. Cloth rather mottled and a little rubbed; earlier owner's name signed on front free endpaper; regular browning; occasional spotting and faint soiling. Good. (Doke, p. 51 [1st edition]; Strange Collection 1132 [Earlier edition]; Murphy & Goff 1099 [Later edition]) "The Roman Catholic Church ... has a different approach to mission work from that of the Protestant churches, but nevertheless it is possible to include the work done at the Trappist monastery of Mariannhill, near Pinetown, Natal, since 1883, under mission presses. Publications in languages as diverse as Polish and Zulu have emanated from this press, and during the first year of the monastery, a vernacular catechism, some broadsides in English and German among which were some hymns." - Anna H. Smith: The Spread of Printing: Eastern Hemisphere, South Africa, p. 78. .
Item Price
$9.25
$14.62 shipping to USA

Description:
(Cape Town: R. Beerman Publishers, no date). 8vo; original blue boards; pictorial dustwrapper; pp. 230 + (ii); illustrations in text. Dustwrapper rather edgeworn and a little rubbed, with tape reinforcing on reverse side, at head of spine; small pen mark on front free endpaper; regular light browning throughout. Good condition. "And so, if this book is to have a message, it is this - and I make no apology for it although it is a very simple message - that the good things, which are everywhere, are a safe and steadfast meeting-ground for all people who have eyes to see, and that the magic has not yet gone from a shrinking world, nor will it though jet planes and space-ships and even stranger things become a part of our daily lives." .
Item Price
$6.17
$14.62 shipping to USA

Description:
(Johannesburg: Bookstorm and Pan Macmillan, 2012) 9781920434441. 208 x 282 mm; laminated pictorial wrappers; pp. 207, incl. index; evocative full-colour photographs of ingredients, dishes and settings. Earlier owner's name signed on half-title. Fine condition. "Come with me on a journey through this hauntingly exquisite city at the foot of Table Mountain. Share a glimpse of the places where I love to prepare and savour the abundant meals that are part of our lives in Cape Town. We'll walk along the promenade in Sea Point and explore the narrow streets of De Waterkant and the Bo Kaap. We'll have tapas in Long Street or we'll wander through Woodstock and have a bowl of spaghetti in Observatory. We'll visit the market for a glass of champagne and a plateful of freshly shucked West Coast oysters … I invite you to sit down at my table and share in the meals that I love to prepare: rich duck soup, Pam's fish pie, lamb and date tagine, duck breast with blueberries,… Read More
Item Price
$24.68
$14.62 shipping to USA

Description:
(Amsterdam: Time-Life Books, 1984) 705415104. "Classics of Exploration" series, text facsimile of the 1810 2nd edition. 8vo; original padded leatherette blocked in red and gilt; a.e.g.; marbled endpapers; pp. (viii) + 472 + (iv); several plates in colours; silk marker; folding map. Fine condition. An account of the life of celebrity Irish pickpocket George Barrington, his transportation to Australia, and elevation to a position of responsibility in the penal colony, before succumbing to insanity, which is euphemistically referred to as 'infirmity' in the book. The work is now known to have been ghostwritten by someone other than Barrington, and includes substantial elements of plagiarism, borrowing particularly from John Hunter's 'Historical Journal of the Transactions at Port Jackson and Norfolk Island'. .
Item Price
$18.51
$14.62 shipping to USA 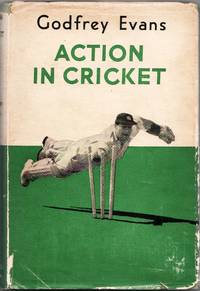 Description:
(London, Hodder and Stoughton, 1956). 8vo; original green boards; price-clipped pictorial dustwrapper rather tanned and edgeworn; small gift inscription on front pastedown; pp. 224, incl. index; black-and-white photographic plates; light foxing to endpapers. Good condition. "Godfrey Evans has played in more tests than any other wicket-keeper (66 to date), has obtained more Test victims than any other 'keeper (147 to date), is the only stumper to dismiss 100 victims and score 1,500 runs in Test cricket, has played in more Tests than any other Kent cricketer, . . . holds the world's record for not conceding a bye while 1,054 runs were scored (Australia 1946)." .
Item Price
$4.32
$14.62 shipping to USA