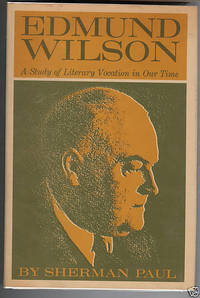 Description:
Two rare books! The first edition signed by the author Sherman Paul and the 1966 second printing. The First edition signed by Paul also comes with a letter from the famous wife of critic Edmund Wilson-Elena Wilson. First edition: Edmund Wilson: A Study of Literary Vocation in Our Times. University Press, Urbana, Ill-1965, First Edition. Cover in very good condition and mylar. Interior bright and clean and signature of Sherman Paul on the inside fly. Includes letter by Elena Wilson to J. Marshall thanking him for his recollection of Edmund Wilson in a 'Punch and Judy' performance. Second volume is the 1966 'second printing'. Cover present but with a surface scratch and back torn with tattered edges and toning with stains. A nice companion to the first edition. It is rare that we have such memorable duplicates. A rare book set, plus letter.
Edmund Wilson (8 May 1895 – 12 June 1972) was an American writer and literary critic. Wilson was considered one of the preeminent American literary critics. Wilson… Read more
Item Price
$179.00
$4.50 shipping to USA 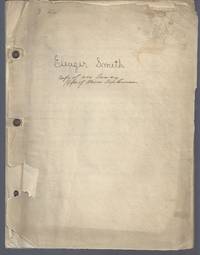 Description:
Title: Eleazar Smith biographical sketch. Creator: Dickinson, Thomas A. Typed in Lawrence, Massachusetts while he was at Steelman & Fuller.
Inclusive dates: 1881
Abstract:The Eleazar Smith biographical sketch is Thomas A. Dickinson's 1881 transcription of Smith's memoir, originally written in 1828. Smith described his experiences as a militiaman during the Revolutionary War, as well as his work as an inventor and machinist in Medfield and Walpole, Massachusetts. Eleazar Smith was born in Medfield, Massachusetts, on April 1, 1755. He had little to no formal education and made a living creating and repairing clocks and other machines, such as devices for making pins and nails, and for setting card teeth. In the summer of 1776, he enlisted in the Medfield militia. He was initially stationed at Ticonderoga, New York, where he was court-martialed on suspicion of counterfeiting currency in the fall of 1776; he later participated in a march to Rhode Island, where he deserted in October 1777. Smith married… Read more
Item Price
$225.00
$4.50 shipping to USA 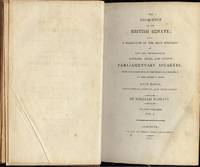 Description:
45 Libraries have copies of this 2 volume set. Covers British Senate speeches from 1625 to 1802. The first American Edition was printed after the First British Edition in 1807. A rare set. Naturally many of the speeches in the second volume are concerned with the American colonies and the what is termed 'obstreperous behavior' of their inhabitants...Hazlitt introduces the various speakers with wonderfully opinionated comments that range from a few lines in length to numerous pages (Edmund Burke & Charles James Fox to name a few). Geoffry Keynes suggests that the odd dating of the two volumes is the result of predating Volume I as it was produced in late 1809 but neglecting to do so in Volume
II. There were two additional editions of 1810, issued in Brooklyn and New York. [Keynes, p. 141. Sabin 3124. Shaw & Shoemaker 17730]. In period leather swirled and decorated boards with some fox and staining as is usual from books and paper of this period. A fine set with the usual abrasions and other tears to… Read more
Item Price
$275.00
$4.50 shipping to USA