Description:
account of his battle to rid the American labor movement of corruption, is signed, without personalization, by Kennedy on the front flyleaf. In 1957, Robert Kennedy "was named chief counsel of what became known as the Rackets Committee and made a name for himself by uncovering corrupt practices in the Teamsters' Union. In 1959 Kennedy left the committee to write The Enemy Within on his investigation" (ANB). Featuring eight pages of photographic illustrations and foreword by Arthur Krock. First edition, early issue, published only a few months after the first issue. Newcomb 206.Book very nearly fine with cloth lightly toned and scuffed at extremities; mild toning to endsheets. Price-clipped dust jacket very good with mild rubbing to edges, including small closed tears and light chipping to front panel. Books signed by Kennedy, particularly this, his first title, are rare and highly desirable. An extremely good signed copy. Book #N3032. $1650. We specialize in rare Ayn Rand, history, and science.
Item Price
$1,650.00
$3.00 shipping to USA 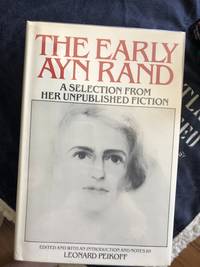 Description:
The largest selection of rare Ayn Rand on the planet! "Here then for all to read is is her early fiction: the first of her stories and also the last--the last, that is, for us to discover and to experience." Ayn Rand's heir, Leonard Peikoff edited and elucidated each piece of this volume of previously unpublished Rand fiction, ranging from beginning exercises Rand set for herself to Rand's first professional sale to Paramount Studios, "Red Pawn," to the power and poetry of passages excised from The Fountainhead. Peikoff places each within the context of Rand's life and growth as writer and philosopher. Inscribed (sans personalization) and dated in the month of publication on the front flyleaf. A lovely copy in fine, collectible condition. Book #C2129. $175. Many more collectible Rand items, including handwritten manuscript pages from Atlas Shrugged, available.
Item Price
$155.00
$3.00 shipping to USA 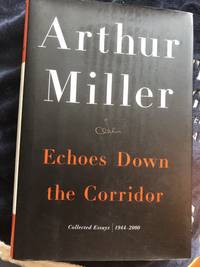 Description:
SIGNED First Edition of Miller's essays, his musings over half a century on O'Neil's tragedies, Nazi trials, and his ever-enduring Death of a Salesman at 50 years old. "Be liked and you will never want." A sumptuous, uread copy in a very fine jacket. Book #C2134. $68. We specialize in rare Ayn Rand, history, and science.
Item Price
$68.00
$3.00 shipping to USA

Description:
SIGNED UNread First Edition of Coelho's arresting novel, signed on front flyleaf. Easily removed "Signed First Edition" sticker on front jacket panel. "What does the world want of me? Does it want me to take no risks, to go back to where I came from because I didn't have the courage to say 'yes' to life? No markings of writings of any kind. Library Quality. Opened only for author's signature. Book #C2130. $200. We specialize in Rare Ayn Rand, history, and science.
Item Price
$200.00
$3.00 shipping to USA

Description:
"Adults deserve to burn in hell, if such a place existed," for using expressions like "come down to earth.' to their children. Thus spaketh Ayn Rand at the Rutgers Centennial Intercollegiate Conference on 'Ethics in Our Times'on March 18, 1966. Her lecture, "Ethics in Education," which identifies the role of romantic art in education, was NEVER published in any Rand book or periodical. Almost unobtainable in any condition, this is a fine copy of the album and of the jacket, which contains Rand's original signature in red ink on the gold album label. Missing from most Ayn Rand collections. Book #P1402. $2100. We offer the largest collection of rare, signed, and manuscript Ayn Rand on the planet!
Item Price
$2,100.00
$3.00 shipping to USA 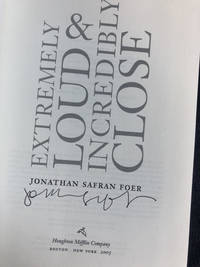 Description:
The voice of a 9 year old child whose father died in the terrorist attack on 9 11. A beautiful signed copy of this novel in highly collectible As New condition. One to watch! Book #C3105. $55. We specialize in Rare Ayn Rand, history, and science.
Item Price
$55.00
$3.00 shipping to USA