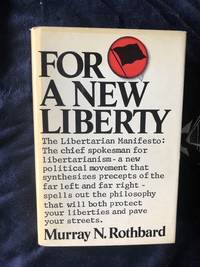 Description:
"THE IDEA OF A LIMITED GOVERNMENT HAS PROVED TO BE UTOPIAN; SOME OTHER, MORE RADICAL MEANS MUST BE FOUND TO PREVENT THE GROWTH OF THE AGGRESSIVE STATE": FIRST EDITION (Stated) of FOR A NEW LIBERTY in ORIGINAL Unclipped jacket.
ROTHBARD, Murray. For a New Liberty. New York: Macmillan, (1973). Octavo, original dusty rose cloth, original dust jacket.
First edition of the work hailed as the "Libertarian Manifesto, Rothbard's seminal work is credited with launching the modern libertarian movement in the United States and explaining the economic merits of free market anarchy.A student and colleague of Ludwig von Mises—the "uncontested dean of the Austrian School of economics" (ANB), and to whom, along with Thomas Jefferson and Charles Holt Campbell, this volume is dedicated—"Rothbard created the modern libertarian movement" (Wendy McElroy). If a copy of For A New Liberty—preferably worn with wear from repeated readings—is not on your bookshelf, or your friends' bookshelves, remedy that grave… Read more
Item Price
$550.00
$3.00 shipping to USA

Description:
Condition: Very Good. Dust Jacket Condition: Very Good. 1st Edition. FIGHTERS FOR FREEDOM. First Edition, Inscribed by Read on the front flyleaf. Read is best known for his two earlier books, Read's Salesmanship and The Abolition of Inheritance. In these brief stories, written in first person to readers, he recounts the battles for liberty--"The inspiring story of Men and Women Who Fought for Liberty throughout the Ages"-- waged by its giants, known (Socrates, Milton) and unknown (Clarkson, Decatur). While some of Read's choices for distinction may be questionable, his charm and dramatic technique appeal to idealists of all ages. Book is very good, square, firm, with slight spine split and darkening to back pastedown. The jacket is chipped at the top and bottom of spine and on the back panel, but maintains its vibrant red, white and blue cover. For lovers of freedom, a welcome, inscribed addition for the library of Liberty. Book #P5a102. $25. We specialize in rare Ayn Rand, history, and science.
Item Price
$25.00
$3.00 shipping to USA 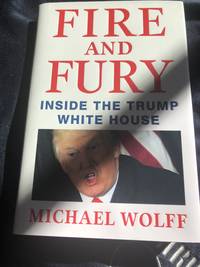 Description:
SIGNED UNmatched Condition! UNread copy of Fire and Fury, Wolff's account of Donald Trump's 2016 campaign and the early days of his presidency. Acquired in person on January 16, 2018 in Philadlephia, this First Edition, Fifth Printing has already become very scarce and highly desirable. A beautiful copy signed without personalization of a book which has made publishing history. Book #C2140. $52. We specialize in Rare Ayn Rand, history, & science.
Item Price
$52.00
$3.00 shipping to USA

Description:
SIGNATURE of Charles Dickens laid in. Limited Edition, #372 of 750 copies, numbered by the author. Leatherette, 8vo, top edge gilt, xvi, 272, [6] pp, frontispiece and 28 plates. Approximately 100 entries. A revised and enlarged edition of Eckel's 1913 work "The First Editions of the Writings of Charles Dickens and their Values. A Bibliography". Eckel provides a great deal of bibliographic detail for identification of true first editions. According to Dickens scholar Duane DeVries: "Eckel's work still stands, despite criticism of its writing style and its errors, as the standard modern bibliography of Dickens's writings, though one directed more toward collectors than scholars.One can easily see why the volume is both praised and criticized. On the one hand, it provides far more information about the works it considers than any previous bibliography had, and it covers the entire range of Dickens's works, from the major novels to the smallest contribution to Household Words, with information on… Read more
Item Price
$1,175.00
$3.00 shipping to USA 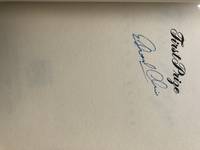 Description:
SIGNED First Edition Review Copy with Publisher's materials of the first novel by Ed Cline, author of the Sparrowhead series, threatened by ISIS, evicted by his landlord as a result. A beautiful, Library Quality copy in like jacket, opened only for Cline to sign. Signature only. Book #P5b113. $55. We specialize in Rare Ayn Rand, history, and science.
Item Price
$55.00
$3.00 shipping to USA

Description:
Collecting Ayn Rand since I first met her! From the largest collection of rare/signed/manuscript Ayn Rand in private hands on the planet! First Edition, Second Printing of Rand's first work of non-fiction. (Also a sixth printing in a price-clipped jacket.) A near-fine copy with PO's inscription in a jacket with minor edgewear and minor soiling. We've built some of the largest, most complete Ayn Rand libraries in the world. Book #P5a101. $40. The largest collection of rare, signed, and manuscript Ayn Rand in private hands!
Item Price
$40.00
$3.00 shipping to USA

Description:
We sanitize all books for public safety before mailing. UNmatched SIGNED Ayn Rand Value! SIGNED First Edition of Ayn Rand's first non-fiction title. "For reasons which are made clear in the following pages, the name I have chosen for my philosophy is Objectivism." First Edition, First Printing of Ayn Rand's first non-fiction tile. Rand's lengthiest explanation in print of her philosophy of history; the essential philosophical passages from her novels. Previous owner's signature on front flyleaf; no other writings or markings in book. Near fine in dust jacket with very light chipping at front upper right panel. Signed by Rand directly on the half-title. NOT a "tipped in" signature. Book #C1101 $1200.00. We carry the world's largest selection of rare, signed, and manuscript Ayn Rand in private hands.
Item Price
$1,200.00
$3.00 shipping to USA 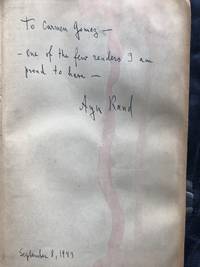 Description:
SIGNED, magnificently Inscribed by Ayn Rand only months after publication: "To--One of the few readers I am proud to have--Ayn Rand--September 8, 1943."First Edition/First Issue in that highly prized First Issue dust jacket. Original red cloth, gilt title on cover, repaired and reinforced spine. Original first-issue dust jacket with 6" half-moon shaped chip to spine. Wear to edges of boards, damp staining to front cover and front endpaper. Exposure to moist conditions evident throughout. Housed in a custom clamshell box, red cloth, gilt title over morocco on spine. Signed by Rand on the front endpaper, NOT a "Tipped-in" or "Laid-in" signature. A unique Rand inscription, the likes of which we've never seen in 45 years of hunting her down at the best prices on the market: "One of the few readers I am proud to have--Ayn Rand." Accompanying the book is a very good copy of the rare pamphlet, "A Letter from Ayn Rand. Author of The Fountainhead," issued by Bobbs Merrill in response to the deluge of requests… Read more
Item Price
$16,800.00
$3.00 shipping to USA

Description:
We offer the largest selection of rare, signed, and manuscript Ayn Rand in private hands. "With the best wishes of the author," Rand inscribed this early printing of her first masterpiece, The Fountainhead, on June 22, 1946. Bound in the publisher's original red cloth, this copy has some staining to boards and a faded spine. Hinges are strong and the book is square, without any cocking. The book contains no writing or markings of any kind. The jacket, complete, UNclipped ($3.00) may be from another early printing, not as snug as it should be. Book #P1203. $3600. We specialize in rare Ayn Rand, history, and science.
Item Price
$3,600.00
$3.00 shipping to USA

Description:
We carry the largest selection of rare, signed, and manuscript Ayn Rand in private hands. Dated by Rand "Christmas, 1945," this si an early printing of The Fountainhead in highly collectible condition. A rare Christmas greeting from Ayn Rand! The ONLY other writing in this copy is a small brief note on another blank page reading "All my love, Maria." Most unusual signed Ayn Rand at the best price on the market. Book #C1115. $2450. Tons more rare Ayn Rand available--just ask : )
Item Price
$2,450.00
$3.00 shipping to USA 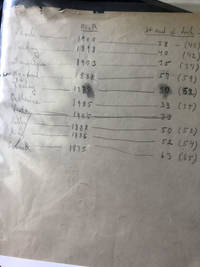 Description:
MATCHLESS, Utterly UNavailable elsewhere! A single page from Ayn Rand's journal detailing the names of all leading characters of her first bestseller, The Fountainhead, their birth years, and two estimates of their ages "at end of book." That "book" did not even have a title when Rand wrote this journal entry! Paper torn at all edges, not affecting Rand's handwritten text. A unique piece of The history of The Fountainhead, Rand's first literary masterpiece, now 75 years old! Book #P1213. $10,500. We carry the world's largest selection of Rare, Signed, and Manuscript Ayn Rand in private hands!
Item Price
$10,500.00
$3.00 shipping to USA

Description:
Just ask us! We offer the largest selection of rare, signed, and manuscript Ayn Rand in private hands! The Omnibook abridged (NOT by Rand: "It's not to awful, but I could have improved it within the same space.") edition of The Fountainhead, the ONLY printing, January 1944, in very good, collectible condition with some minor abrasion at the edges. According to one Rand biographer, this abridged edition of the novel was sold to members of the United States Armed Forces during WW2. A tough-find Rand item at the best price on the market! Book #P8102. $52. We specialize in rare Ayn Rand, history, and science.
Item Price
$52.00
$3.00 shipping to USA 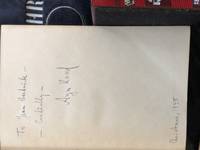 Description:
SIGNED, inscribed and dated Christmas 1945 by Ayn Rand. "To say 'I love you,' one must know first how to say the 'I'"(The Fountainhead). Ayn Rand's breakthrough novel, signed and inscribed "Christmas, 1945" in Rand's pen. Early printing, a good copy, hinges holding but delicate. Lacks dust jacket. Apart from Rand's inscription, no writings or markings of any kind. An unbeatable price for signed Ayn Rand. Book #C1115. $1900. We offer the world's largest selection of rare, signed and manuscript Ayn Rand in private hands.
Item Price
$1,900.00
$3.00 shipping to USA 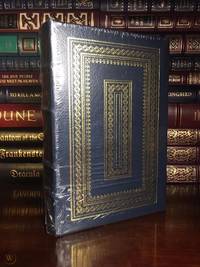 Description:
PERFECT copy, Still Sealed in Publisher's Shrink Wrap! The single-volume Easton Press copy of Rand's first bestseller, a novel which has sold more than 10,000,000 copies, The Fountainhead. Never touched or open, this Easton Press is the finest copy available. Bound in fine genuine leather, this utterly flawless, library-quality copy of The Fountainhead is accented with 22k gold lettering and decorations and hubbed with Easton's distinctive raised spine rings. Page ends are gilded in 22k gold to protect against dust and humidity. TF is also printed on archival-quality acid-neutral paper, Pages are Smyth sewn, in which groups of folded pages are stitched together using binder thread, into the bindings, and boast traditional marbled endsheets, plus gilded page-ends for strength and durability. Endsheets of moire silk and a permanent satin ribbon page marker. THE perfect gift for Ayn Rand collectors. Incommunicable! Book #C3119. $500. We offer the world's largest selection of rare, signed, and manuscript… Read more
Item Price
$500.00
$3.00 shipping to USA 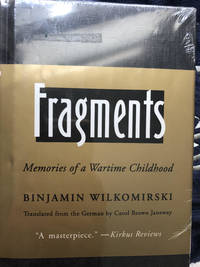 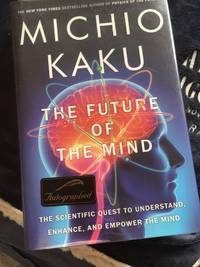 Description:
SIGNED, Unread First Edition of Kaku's "radically new theory of consciousness: "The possibilities are endless, and it seems that everyone from computer giants, educators, video game companies, and music studios to the Pentagon is converging on this technology." First Printing of Kaku's ground-breaking work. A magnificent copy, none better,SIGNED without personalization. In Archival protection, as we expect this title to appreciate. Book #C2132. $138. We specialize in rare Ayn Rand, history, and science.
Item Price
$138.00
$3.00 shipping to USA