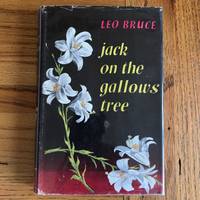 Description:
London: Peter Davies, 1060. I am pleased to offer a selection of original dust wrapper art- work by the noted artist Biro painted for the publisher Peter Davies to illustrate the dust wrappers of a number of Leo Bruce 1st editions. All are dust wrapper size and illustrate the front cover and the spine of each title. They appear to be "roughs" painted by the artist to show the publisher what the dust wrapper might look like and some have the artist's comments (in pencil) on the verso of the painting
Item Price
$309.98
$28.52 shipping to USA 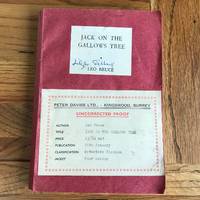 Description:
London: Peter Davies, 1960. First Edition. Dust Jacket. UNCORRECTED PROOF COPY. A softback production issued without a D/W. Bound in red wrappers with a Peter Davies UNCORRECTED PROOF label attached to the front cover announcing that the book will be issued for sale at 13/6 on 28th January with a Four colour D/W and a separate label with the title of the book and the author's name. Rare in a Proof state. A VG copy (spine slant) and a short closed tear to the edge of the front cover.
Item Price
$117.79
$28.52 shipping to USA

Description:
London. Two Volumes published by the Express Newspapers Limited and BOTH SIGNED & INSCRIBED IN THE YEAR OF PUBLICATION BY JAK WITH HIS CUSTOMARY BLOB SERIFS comprising: Volumes 14 (1982) and 15 (1983). Both softbacks in VG (or better condition). Jak of the London Evening Standard, the Daily Express and the Mail on Sunday was one of Britain's best-loved daily cartoonists. For the pair:
Item Price
$62.00
$28.52 shipping to USA

Description:
London. Seven First Editions all published by the Express Newspapers Limited and EACH SIGNED & INSCRIBED IN THE YEAR OF PUBLICATION BY JAK WITH HIS CUSTOMARY BLOB SERIFS comprising: Volumes 10 (1978), 11 (1979), 12 (1980), 13 (1981), 14 (1982), 15 (1983) and 16 (1984). All softbacks in VG (or better condition). It is highly unusual to find a group of these cartoon publications all signed and inscribed by the Cartoonist. Jak of the London Evening Standard, the Daily Express and the Mail on Sunday was one of Britain's best-loved daily cartoonists. He was, like Carl Giles before him, a cartoonist of everyday people - from the streets, the factories, the offices, the services - warts and all. He delighted in sending up all sections of society, from navvies and bimbos to clubmen and royalty. And when they were politically incorrect so was he. Jak drew his hands with three fingers in the style of Disney animators. Photographs/scans available upon request. For the SEVEN BOOKS:
Item Price
$216.98
$28.52 shipping to USA 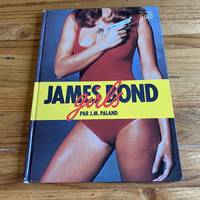 Description:
Paris: PAC, 1985. First Edition. Hard Cover. First French Edition (not published in English). A large format hardback production (not published in English). Full of colour and black and white photographs of the Girls and Film Posters etc. Paland was a leading light in the French Bond Fan Club of the 1980s and had access to much Eon publicity material which was not available elsewhere. This book was produced without paying Eon any licence fees. The book was subsequently banned and is very scarce. It is one of the rarest items of Bond ephemera. A VG+ copy with just a hint of fraying at the tip and tail of the spine. Scarce.
Item Price
$805.94
$28.52 shipping to USA

Description:
London: Elm Tree Press, 1983. First Edition. Hard Cover. Dust Jacket. Signed by Author. First UK Edition. A fine copy in like D/W. Inscribed by the Author to the actor Michael Caine: Michael Caine/ with very best wishes/ and many thanks/ Andrew Rissik. Laid in is a 2-page hand-wriiten letter from Andrew Rissik to Michael Caine apologising that the acknowledgements page had been omitted by his publishers and thanking Caine for his kindness, consideration and willingness to help. A nice item and a Unique Association Copy.
Item Price
$185.98
$28.52 shipping to USA 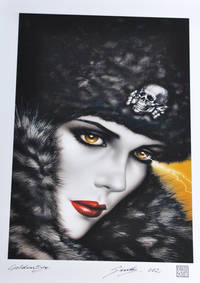 Description:
James Bond Artwork. Own one of only 25 limited edition Giclee prints produced from the original artwork created for the James Bond books: Tomorrow Never Dies, The World is Not Enough and Goldeneye. Tomorrow Never Dies, The World is Not Enough and Goldeneye were all written to tie in with the release of films. As collectors will know, the books were finally printed with photo images of Pierce Brosnan as Bond, rather than the usual 'action' illustration. The artist, David Scutt, who produced many of covers for the first English editions books in the James Bond series, has agreed to the production of a strictly limited edition set of prints of his original ideas. This is the artwork image that would have been used for the dust wrapper illustrations of the books if the 'Brosnan' image had not been used. Few collectors will ever have seen these images before although it is believed that a few proof covers were printed using the original Goldeneye artwork. Each Giclee print has been reproduced… Read More
Item Price
$464.96
$28.52 shipping to USA 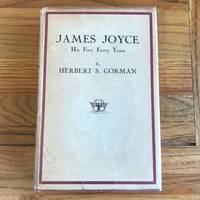 Description:
London: Geoffrey Bles, 1926. First Edition. Hard Cover. Dust Jacket. First UK Edition. Publisher’s original brick-red cloth with paper label to the spine. A slightly dusty top edge and a little foxing to the fore-edge otherwise a VG++ copy in like 7/6 net D/W with a touch of fraying at the spine tips and a browned spine. An uncommon book in the UK first edition. The first book about James Joyce.
Item Price
$229.38
$28.52 shipping to USA 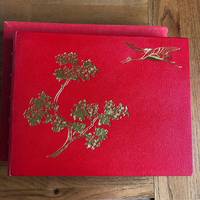 Description:
1986. Japan & The East (Privately Printed by the Earl and Countess Spencer 1986). # 42 of a Special Limited Edition of 250 Copies printed on Huntsman Satin Art Paper by Jolly & Barber of Rugby and bound by Zaehnsdorf of London. Full red crushed morocco with raised bands to the spine and gilt tooling to the front and rear boards. All edges gilt. Red cloth slip-case. Fine in slip-case. [John, Earl Spencer was Princess Dianas father and Raine, her step-mother]. Laid in is the original sales ticket showing that this book was originally offered for sale at £295
Item Price
$365.77
$28.52 shipping to USA 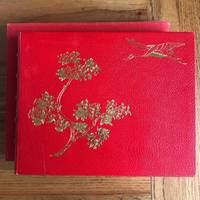 Description:
London, 1986. Signed by Author. Japan & The East (Privately Printed by the Earl and Countess Spencer 1986). # 15 of a Special Limited Edition of 250 Copies printed on Huntsman Satin Art Paper by Jolly & Barber of Rugby and bound by Zaehnsdorf of London. Full red crushed morocco with raised bands to the spine and gilt tooling to the front and rear boards. All edges gilt. Red cloth slip-case. This copy has been additionally inscribed by the Author To Ted and Jean. A wonderful production. Laid in is an At Home invitation (in its original envelope) addressed to Mr & Mrs Sewell from the Earl and Countess Spencer to Launch Japan and the East. The party took place at Althorp on Saturday 13th September 1986. Also laid in is a TLS (dated Autumn 1987) signed Raine and John Spencer inviting Mr and Mrs Sewell to a Christmas Party to view the Christmas Presents at Althorp on Saturday 7th November 1987. Also enclosed are a hand-written card and a separate letter (from Raine Spencer) both in thieir… Read More
Item Price
$464.96
$28.52 shipping to USA

Description:
London: Lyebird, 1972. Signed by Author. (John Piper) The Jesse Tree (Lyebird Press 1972) by Anne Ridler. # 62 of 100 copies signed by the Authoress and the Artist (John Piper). Printed on handmade paper including a colour lithograph as frontispiece. 9 plain illustrations within the text, 2 being full-page. Buckram backed pictorial paper-covered boards with gilt spine lettering, board slipcase. A VG+ copy in original slip-case reinforced with tape to two edges.
Item Price
$247.98
$28.52 shipping to USA 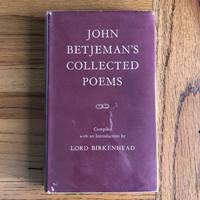 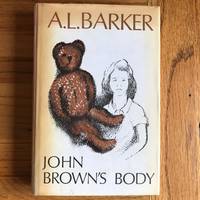 Description:
London: Hogarth Press, 1969. First Edition. Hard Cover. Dust Jacket. First UK edition. The top right hand corner of 3 pages has a crease (probably a binding fault) and a few marks to the fore-edge otherwise a VG copy in a VG+ D/W with the usual browning to the spine and to the edges of both the front and back cover. A Booker short-listed novel
Item Price
$68.19
$28.52 shipping to USA 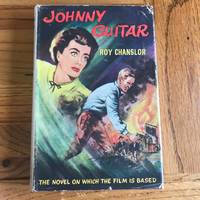 Description:
London: Robert Hale, 1954. First Edition. Hard Cover. Dust Jacket. First UK Edition. A bookseller's ticket on the front paste-down, a couple of minor bumps to the boards and some light foxing to the page edges overall a nice VG book. The very rare pictorial D/W is VG indeed and is not price-clipped and is pretty much complete. There is a touch of rubbing to the extremities and a short closed tear with associated creasing to to the back panel. The basis for the ground-breaking, famously over-heated Republic Pictures movie of the same name starring Joan Crawford as Vienna, Sterling Hayden as Johnny 'Guitar' Logan, Mercedes McCambridge as Emma Small, Scott Brady as Dancin' Kid, Ernest Borgnine as Bart Lonergan and directed by Nicholas Ray. This, the British first edition, is significantly rarer than its US counterpart and is seldom seen in D/W.
Item Price
$929.92
$28.52 shipping to USA

Description:
London: Blackie, 1940. First Edition. Hard Cover. Dust Jacket. First UK Edition. In the rare D/W priced 3/6 net to the spine as called for. Although the book is not dated this is definitely the UK first edition and it accords in all respects with the English Catalogue of Books for 1940. Beautifully illustrated by Honor C Appleton. A VG+ copy in a VG slightly creased and edge-worn D/W.
Item Price
$59.52
$28.52 shipping to USA 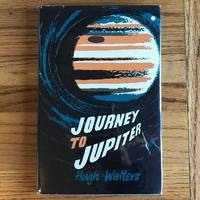 Description:
London: Faber, 1965. First Edition. Hard Cover. Dust Jacket. First UK Edition. A near fine (or better) copy in like D/W with minuscule wear to the spine tips and corners and one tiny closed nick to the top edge of the back panel. Uncommon. A very nice copy indeed.
Item Price
$402.97
$28.52 shipping to USA 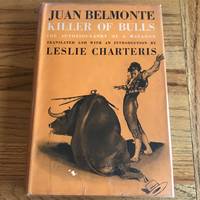 Description:
London: Heinemann, 1937. First Edition. Hard Cover. Dust Jacket. as told to Manuel Chaves Nogales. First UK Edition. Translated from the Spanish and with a note on bullfighting by Leslie Charteris. Foxing to the page edges and evidence of tape residue to both the front and rear end-papers (caused by an old D/W protector) but overall still VG indeed. In the VERY RARE D/W which is complete with two small tape marks to the front and rear flaps and several tape marks to the verso which do not show through to the front side. I have more than 15 years experience of collecting and dealing in Leslie Charteris first editions and this is the first example in D/W that I have encountered. Rare.
Item Price
$929.92
$28.52 shipping to USA