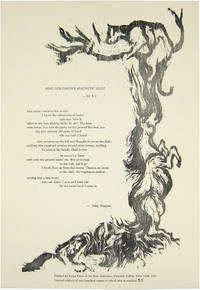 Description:
Pleasant Valley New York: Kriya Press, 1967. First Edition. Broadside. Near fine. Broadside, 16 x 11 inches. Numbered 35 of 100 copies. Light wear at edges. Near fine. One of the first six broadsides printed at the Kriya Press, in the year it was founded at the Sri Ram Ashrama in Pleasant Valley.
Item Price
$50.00
$5.00 shipping to USA 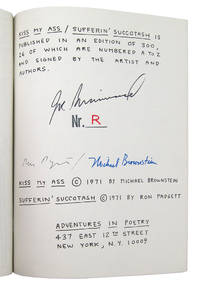 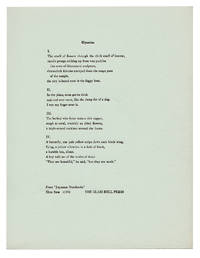 Description:
[Detroit]: The Glass Bell Press, 1974. First Separate Edition. Broadside. Fine. Broadside, 11 x 8 inches, printed on pale green paper. Fine. First separate edition of this portion of Ellen Bass's longer poem, "Japanese Notebooks," which was published a year earlier in her first collection of poetry, I'M NOT YOUR LAUGHING DAUGHTER. In 1973, Bass also co-published (with Florence Howe) NO MORE MASKS!, one of the first major anthologies of 20th-century women's poetry. Detroit's Glass Bell Press published poems by women from 1974 to 1979, largely in broadside form. In 1975, Glass Bell printed 10 broadsides for the portfolio collection, TEN MICHIGAN WOMEN POETS. The present broadside is one of nine Glass Bell printed in 1974 for which we have found records, but it remains unclear whether the 1974 broadside were intended or issued as a collection. Scarce, with OCLC locating one copy, at Brown University.
Item Price
$50.00
$5.00 shipping to USA