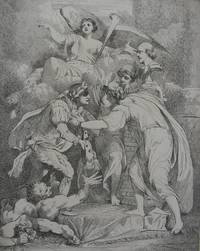 Description:
No Binding. Etching, trimmed outside border, title and imprint missing, removed from a stretcher, Pencilled on reverse, 'Fame introducing Garrick to Shakepeare' and 'from Mortimer's Collection'At the Christie's sale of Jane Mortimer's collection in 1808 lot 30 purchased by Palser was the Copper Plate for this etching and 16 impressions of the print.
Item Price
$297.44
$13.46 shipping to USA

Description:
Engraving, trimmed within platemark and laid down, two small tears on right side, The Battle of Cap-FranŹais was a naval engagement during the Seven Years' War outside the harbour of Cap-FranŹais, Saint-Domingue, Haiti on 21 October 1757. Three British ships of the line under Commodore Arthur Forrest attacked a superior French force of seven ships under the command Guy Comte de Kersaint, which was escorting a merchant fleet. Kersaint thought by sailing out of Cap-Francais the British ships would be driven away, however Forrest and the other captains determined to engage with the enemy. A fierce battle ensued with furious fighting and there was much damage to the ships' masts and rigging. Although the battle was indecisive the British officers were lauded for their audacity.
Item Price
$403.67
$13.46 shipping to USA

Description:
Hand-coloured engraving, from ' Historical Descriptions of New and Elegant Picturesque Views of the Antiquities of England and Wales',
Item Price
$11.33
$13.46 shipping to USA

Description:
Engraving, from 'An universal history, from the earliest account of time', vertical folds, This vast palace in Rome with landscaped gardens, known as 'Domus Aurea' was rediscovered in the 15th century.
Item Price
$63.74
$13.46 shipping to USA