Description:
200pp, in ink, on pages with 25 ruled lines, most entries have a numeral by them, perhaps referring to another ledger; some leaves have been torn out and16 pages have been scribbled on by a child. 4to (9.25 x 8in) contemp. ruled velllum, some marking, This account book gives a picture of a leading Midlands industralist who was involved in local society and charities. Joseph Webster III [1783-1856] took control of the family business in 1801 when his mother Phoebe sold him the estate for 5s and a peppercorn rent. His father had died in a hunting accident in 1788, after which Phoebe was forced to oversee the firm. The business was begun by John Webster [1687-1757] who produced iron bar ar Perry Barr and after 1720 turned to wire production. When Joseph Webster III took over, the production was based north-east of Birmingham near Sutton Coldfield, with wire mills at Perry Barr and Penns, and steel was made at Plants Brook forge in Minworth. In Birmingham there was an office, stockroom and a warehouse… Read more
Item Price
$773.85
$13.37 shipping to USA

Description:
Ross shot down 11 enemy planes, and finished his service as AustraliaÕs most decorated WWI pilot. He is mentioned several times in Lawrence's book, 'Seven Pillars of Wisdom'.
Item Price
$28.14
$13.37 shipping to USA

Description:
explaining he will keep the gallery with his collection open another week.
Item Price
$14.07
$13.37 shipping to USA 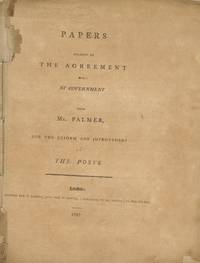 Description:
8 appendices; vi+12+8+65pp. 4to, as originally sewn, uncut, some fraying and marking on leaf edges, later blue wrappers detached, The foreword is signed by John Palmer. John Palmer [1742-1818] suggested the postal service could be improved by using mail coaches. He was appointed Comptroller General of the Post Office in 1786. The experiment was a great success improving the speed of the mail. Revenue was greatly increased but there was a delay in his share being paid. Eventually he was paid a substantial amount but he still claimed it was not the full share agreed. This publication presumably instigated by Palmer was part of his campaign to get the full sum he thought he was owed. Palmer's claim for recompense was not met fully, but in 1813 (53 Geo. III, c. 157) an award of some £50,000 was made.
Item Price
$211.05
$13.37 shipping to USA

Description:
Engraving, slight stain in left bottom corner, small tear near top border, trimmed to image, tipped onto backing sheet, The original painting dated 1637 is in the Hermitage but is now ascribed to the Circle of Rembrandt.
Item Price
$63.32
$13.37 shipping to USA 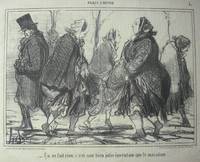 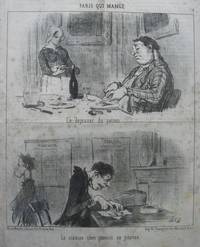 Description:
Lithograph, signed on plate with initials, published in 'Le Charivari' by Martinet, 26 June 1852, foxing, horizontal crease, The only print in this series showing the different food eaten by the rich and poor.
Item Price
$56.28
$13.37 shipping to USA

Description:
Hardcover. Very good. Regamey. 120, and 96 etched vignettes printed on papier de chine, some full-page, most by FREDERIC REGAMEY and others by Chauvet, LŽon Gaucherel, Jules Adeline, Armand Guiiiaumin and others, including illustrations of cats, the theatre, posters, portraits of Victor Hugo and others, indexes ; iv+300pp, iv+272pp; folio (290 x 210mm) green morocco gilt with raised bands, marbled boards, wear on extremities, This journal was created to celebrate Paris and the etching revival inspired by a renewed appreciation of Rembrandt's work. Most of the etchings were by Frederic RŽgamey [1849-1925], who was the illustrations editor.This volume collects the 35 numbers issued between March and November 1873. These early numbers contain a large number of illustrations including a full page etching of 'La Ruelle Barrault' by Armand Guillaumin [1841-1927]. No Jacket issued
Item Price
$246.23
$13.37 shipping to USA