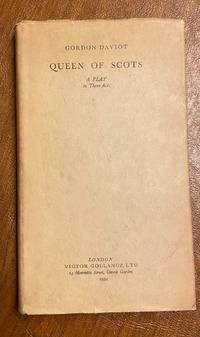 Description:
Early play by this reclusive mystery writer. Her play RICHARD OF BORDEAUX gave Sir John Gielgud his start; this one featured, among others, Sir Lawrence Olivier. The Ian Fleming in the cast was not the creator of James Bond, but appears to be the one who played Dr. Watson in a series of 1930s Sherlock Holmes films. This copy was from the collection of Adrian Homer Goldstone, major mystery collector, and has his bookplate on the front endpaper; there is also a 1934 gift inscription. Laid in is Goldstone's catalog card for the book. Book is tight and clean with no other writing. Jacket is slightly rubbed, with some edge-wear and spine browning.The jacket lists prices for both hardcover and paperback editions. Black cloth, red paper label on spine. Uncommon.
Item Price
$150.00
$3.50 shipping to USA