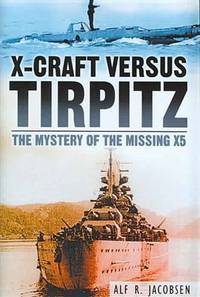 Description:
(Subject: Naval & Maritime: Ships, Submarines & Other Vessels - General) On 22 September 1943, six X-craft midget submarines set out from Scotland to sink the battleship at anchor in Norway. Only X5, X6 and X7 reached the target. Lt Donald Cameron in X6 and Lt Godfrey Place in X7 placed their charges successfully, but were forced to surrender. Both were awarded the Victoria Cross. The fate of X5 is unclear. Although Tirpitz was not sunk she was put out of action until April 1944. (Published: 2006) (Publisher: Sutton Publishing) (ISBN: 075094112X) (Pagination: 287pp, endpaper maps, illustrations.) (Condition: Fine in dw) UL-XXXXXX
Item Price
$11.58
$27.69 shipping to USA