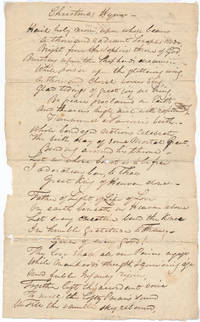 The only child of George Washington's long-time personal secretary Tobias Lear was actually born in the early "White House" in Philadelphia, and Washington was his godfather; his mother died when he was two (Thomas Jefferson and Alexander Hamilton were among her pallbearers), and he went on to become a successful attorney in Washington, DC; Gilbert Stuart painted a well-known portrait of him. Outstanding AMS, 2pp (recto and verso), 7 3/4" X 12 3/4", Portsmouth, NH, 1817 August 20. Very good. Three light horizontal original folds; mild age toning and slight edgewear. This attractively and boldly penned document is titled "Christmas Hymn," and contains the full text of a Christmas song whose original we have not been able to determine. Begins, "Hail holy morn, upon whose beams / A thousand radiant Seraphs rode, / Bright from the Sapphire throne of God. / Bursting upon the Shepherd's dreams.- / While poised upon the glittering wing, / A thousand choral voices sing, / Glad tidings of great joy we bring, / Be peace proclaimed on Earth / And Heaven's high arch with rapture ring...." Goes on for several more stanzas, closing with: "Thus for the gift that thou hast given, / Hereafter we shall learn to rain / On days of everlasting Praise, / Tun'd to the Gold en Harps of Heaven." He then concludes, "Written from recollection for my Dear Cousin Miss Mary Storer," boldly dated and signed. Storer was the given name of Lear's mother, Mary "Polly" Lear (the first of Tobias Lear's three wives), who was related to the Washington family. There were a great many prominent Storers in early Portsmouth history, among them a Mary Storer born around 1785, who might well have been the recipient of this keepsake. Whether Lear's "recollection" of this hymn refers to him recalling a hymn he himself had written years before or to a hymn written by another is not clear, and certainly warrants further research. A most unusual and extremely interesting document.

Main Street Fine Books & Manuscripts accepts most major credit cards and PayPal. Checks are welcome. Institutions will be accommodated as their procedures require. Every effort has been made to describe each book and any defects accurately. If an item proves unsatisfactory for any reason, it may be returned within seven days. We would appreciate a courtesy call if an item is being returned. Member ABAA, ILAB, MWABA, The Manuscript Society.

Seller rating:
This seller has earned a 5 of 5 Stars rating from Biblio customers.
Biblio.com member since 2005
Galena, Illinois
Ask Seller a Question

Main Street Fine Books & Manuscripts has been serving book lovers, collectors and institutions since 1991. Our inventory of quality out-of-print books spans 50 subjects, while the extensive autograph holdings have a decidedly historical bent, reflecting personages from every field of human endeavor.