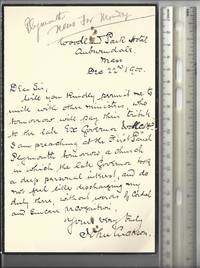 Letter to the Plymouth News about Death of Ex. Gov. Roger Wolcott of Massachusetts

Letter to the Plymouth News about Death of Ex. Gov. Roger Wolcott of Massachusetts

Dr. John Cuckson (1845-1907) was a minister and wrote: "The First Church in Plymouth- 1606-1901", Published by Geo. H. Ellis Co., 272 Congress Street, Boston Massachusetts. 1901. 8vo, 144 pgs. It was reprinted in 1920 by Beacon Press, Boston. In 1907, shortly before his death, at a meeting of the New England Society of Brooklyn, Dr. Cuckson is quoted in The Sun, NY, NY as having said: "To be a true liberal in religion a man must be cultivated, he must control his passion and prejudices and recognize the right of the others to differ. We must do away for all time with dogmatic exclusiveness and work together in a broad Christian freedom." He served the First Parish Church of Plymouth Massachusetts from 1901-1907.

When Dr. Herford returned to his native England, he recommended as his successor a fellow Brit, one Dr. John Cuckson, who served here from 1892–1900. But he was no match for Dr. Herford's charisma; Dr. Cuckson was more a scholar than a pastor, and the congregation was not well pleased. His lack of popularity was not helped when Dr. Cuckson developed insomnia and began to be incoherent in the pulpit and to fall asleep in public. Finally, the "gentlemen of the Prudential Committee" voted to let him go, with severance pay. (courtesy of Arlington Street Church, Boston, Massachusetts website).

ROGER WOLCOTT, the forty-first governor of Massachusetts, was born in Boston, Massachusetts on July 13, 1847. His education was attained at Harvard University, where he earned an undergraduate degree in 1870, and four years later earned a law degree. Wolcott entered politics in 1882, serving as a member of the Massachusetts House of Representatives, a position he held two years. He also served as the first president of the Massachusetts Republican Club and was the lieutenant governor of Massachusetts from 1892 to 1896. On March 5, 1896, Governor Frederic T. Greenhalge passed away, and Wolcott, who was the lieutenant governor at the time, assumed the duties of the governorship. He was elected to his own term on November 3, 1896 and won reelection in 1897 and 1898. During his tenure, the Spanish-American War had started; funding was secured for military expenses; and the state's troops were the first to be deployed to active duty. After completing his term, Wolcott left office on January 4, 1900. He later served as a Republican presidential elector in 1900. Wolcott also declined an appointment as U.S. Ambassador to Italy, as well as turning down an appointment as Commissioner to the Philippines. Governor Roger Wolcott passed away on December 21, 1900 and was buried in the Mt. Auburn Cemetery in Cambridge, Massachusetts.