Join us October 7–16, 2022 for our upcoming virtual antiquarian book fair!
Preregister now for Biblio.live and get $10 to use at the fair.
Home G.Gosen Rare Books & Old Paper, ABAA, ILAB The Tragedy of Cato. This Present Saturday, March 16, 1811, will be acted (the 10th time) the Tragedy of Cato. 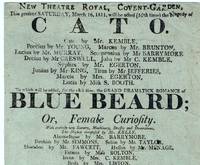 Kemble, John, Theatrical Broadside for the New Theatre Royal, Covent-Garden, Saturday, March 6, 1811, 23.5 cm x 15.5 cm, linen-backed blue paper, with a portrait of John Kemble, engraved by J. Rogers from a drawing by T. Wageman, on the verso. Below the portrait is a cutting of the cast of The Tragedy of Cato. This Present Saturday, March 16, 1811, will be acted (the 10th time) the Tragedy of Cato. To Which will be added, for the 18th time, the GRAND DRAMMATICK ROMANCE of BLUE BEARD; Or, Female Curiosity. Trimmed, slightly soiled, otherwise very good. A remarkable document of the life and career of John Kemble.

John Kemble was born into a family of actors. His brother Charles Kemble also appeared in the performance advertised on this broadside. John was the second child of Roger Kemble, manager of the Warwickshire Company of Comedians. He was educated at Sedgley Park Catholic Seminary and the English college at Douai, France. John Kemble first appeared at the Royal Theatre, Drury Lane, as Hamlet in 1783, due in part to the fame of his sister Sarah Siddons.

Cato, a Tragedy is a play written by Joseph Addison in 1712, a theatrical piece that emphasizes individual liberty (Marcus Porcius Cato Uticensis (95 BC – April 46 BC) commonly known as Cato the Younger or Cato Minor) over tyranny (Gaius Julius Caesar July 100 – 15 March 44 BC). It was a popular play, one of Kemble's signature roles, and a play that George Washington had performed for the Continental Army while it was encamped at Valley Forge.

soiled
Generally refers to minor discoloration or staining.
New
A new book is a book previously not circulated to a buyer. Although a new book is typically free of any faults or defects, "new"... [More]
verso
The page bound on the left side of a book, opposite to the recto page.