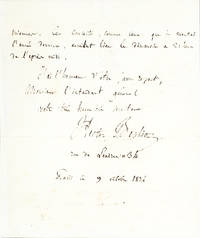 "I am planning to give three concerts over the course of next November. The Salle des Menus Plaisirs, which you have been kind enough to make available to me several times in the past, is really the only venue in Paris that lends itself to these kinds of musical events. So I request that you will grant me permission to hold mine there. These concerts, just like the ones I gave last years, would take place on Sundays at 2 in the afternoon. With all my respect, dear General Intendant, your humble servant…"

The 1830s were difficult for Berlioz. Bereft of the recognition he craved, and unable to earn a steady income from composing, he worked as a critic for several journals and newspapers and accepted the few commissions that came his way. Nevertheless, he produced a number of works, including the symphony Harold en Italie which premiered on November 9, 1834, (a month after writing our letter) at the Salle du Conservatoire, the theater attached to the Hôtel des Menus-Plaisirs and the venue for most of Berlioz's symphonic works. Harold en Italie, based on Byron's narrative poem, so captivated Italian violinist and composer Niccolo Paganini (for whom it was written) that in 1838 he presented Berlioz with a gift of 20,000 francs. A plaque outside the Salle du Conservatoire commemorates Berlioz's performances there.
Our letter was written from 34 rue de Londres, Berlioz's home between 1834 and 1836. Docketed in the top margin. Folded and slightly creased; framed with a portrait of Berlioz, though not examined out of the frame. A very early letter and, as such, uncommon.

At Lion Heart Autographs, every autograph we sell is unconditionally guaranteed authentic without time limit to the original purchaser. Autographs are sent on 3-day approval and for refund purposes, must be returned in the same condition they were sent.

Since 1978, Lion Heart Autographs has been one of the world's leading dealers in historical autographs and manuscripts in the subject areas of art, history, literature, music, and science.