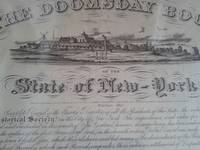 Certificate of Record for the family of Stephen H. Thayer from The Doomsday Book of the State of New York.

Certificate of Record for the family of Stephen H. Thayer from The Doomsday Book of the State of New York.: Founded 1860. Entered According to an Act of Congress, in the Year 1860, by Albert Welles, in the Clerk’s Office of the District Court of the Southern District of New York.

According to the prospectus published and circulated by Welles & Gilette, the purpose of this latter-day Doomsday book was: "So those who desire to be known and remembered by their posterity; So those whose wealth and position induce them, for the benefit of their descendants, to place on record a correct register of their families; So those rightful heirs unable to establish their claims to estates clearly their own …". The most striking features of this extraordinary document are a lithographed view of New York as an early Dutch settlement at the top and the facsimile signatures of the most illustrious citizens of the State and City of New York, which fill up half the area of the broadside, beginning with Millard Fillmore, Hamilton Fish, Peter Cooper, Edward Everett, John A. Dix, James W. Beekman, I. Van Buren, et alia. Condition is fair, as the broadside is housed in a heavy transparent sleeve, and is in an unrestored state. No other copies of the Certificate of Record for the Family of Stephen H. Thayer, Vol. I, No. 51 has been located.

Only one copy of a blank Certificate of Record was found at the New York Historical Society, which also has a very rare surviving copy of Welles & Gillette's prospectus. See also: The Home Journal, December 1, 1860; The World, December 11, 1860; The Morning Courier and New York Enquirer, November 20, 1860. Most useful: Report of the Meeting of the New York Historical Society Held Tuesday, November 6, 1860.

facsimile
An exact copy of an original work. In books, it refers to a copy or reproduction, as accurate as possible, of an original... [More]
Fair
is a worn book that has complete text pages (including those with maps or plates) but may lack endpapers, half-title, etc.... [More]
New
A new book is a book previously not circulated to a buyer. Although a new book is typically free of any faults or defects, "new"... [More]