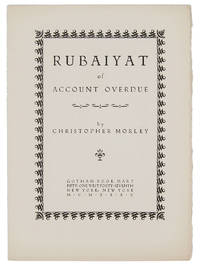 The "deluxe" edition of a satirical poem composed by Christopher Morley and designed and printed by Lew Ney to help their friend and patron, Frances Steloff, founder and owner of Gotham Book Mart, during a moment of financial insecurity at the store in the mid-1930s. It "has been printed in this limited edition of 350 copies from Inkanabula type, imported from Italy. It was set by hand, and the type has been distributed." In the 1975 "Special Gotham Book Mart Issue" of JOURNAL OF MODERN LITERATURE (Vol. 4, No. 4), Frances Steloff describes the origin of the poem and its publication. One day in 1935, Steloff was dictating correspondence in the back of the shop, unaware that her friend and Gotham Book Mart regular Christopher Morley had stopped by. "He asked why I looked so glum, and I told him that I had been dictating dunning letters with the remark that if I could collect half of the outstanding accounts I could pay my rent and most of my bills. He asked if he could see a few of the letters, and I handed him the carbon copies. He then asked if he could borrow them. I was uneasy and thought that he might turn them over to an attorney, causing my customers embarrassment. He assured me that he just wanted to look them over and would return them on his next visit. In a few days he called up, 'Frances are you there?' Of course I was, and in a few minutes he was also, holding a page of manuscript. He asked excitedly, 'Are you familiar with the meter of the Rubaiyat?' I was, of course, as it had at one time been a favorite. He then read aloud the 'Rubaiyat of Account Overdue.' . . . Delighted with it, I decided to have it printed in two formats: a single page, to be sent with bills to all past due accounts, stating that a deluxe, autographed edition would be forthcoming on receipt of a check by return mail. That not only brought good results but also a problem - our prompt paying customers then felt it was more rewarding to be delinquent" (pp. 791-792). The present example of the poem was printed in its deluxe format, but not signed, and lettered, "HC" ("hors commerce"), rather than numbered, in the limitation statement. A fine survival from a touching and memorable chapter of the history of Gotham.

quarto
The term quarto is used to describe a page or book size. A printed sheet is made with four pages of text on each side, and the...[more]
colophon
The colophon contains information about a book's publisher, the typesetting, printer, and possibly even includes a printer's...[more]
fine
A book in fine condition exhibits no flaws. A fine condition book closely approaches As New condition, but may lack the...[more]
First Edition
In book collecting, the first edition is the earliest published form of a book. A book may have more than one first edition in...[more]