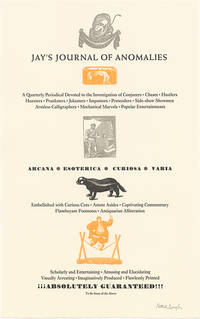 Letterpress broadside advertising the launch of Ricky Jay's now-legendary JOURNAL OF ANOMALIES, the "Quarterly Periodical Devoted to the Investigation of Conjurors, Cheats, Hustlers, Hoaxters, Pranksters, Jokesters, Imposters, Pretenders, Side-show Showmen, Armless Calligraphers, Mechanical Marvels, [and] Popular Entertainments." The JOURNAL ran for 16 issues, from 1994 to 2000, before being compiled and published in a single volume in 2001. In his afterword to the 2001 book, Jay described the "major catalyst" for creating the journal as "the pursuit of a higher standard of illustration, type, and paper than the mainstream publishers of my early work were able to provide." To achieve that standard, he enlisted the help of printer and designer Patrick Reagh, "regarded as one of the finest letterpressmen in southern California and certainly the only one who played a mean salsa piano." Reagh would go on to design the magazine and print each issue by letterpress on mold-made paper. The magnificent result was, wrote Jay, an "anomaly devoted to anomalies."

To announce the publication to prospective subscribers and provide a sense of how the journal would look and feel, Reagh printed a promotional broadside using the same typefaces and paper (Ehrhardt, Thorowgood, and Weiss on Rives Heavyweight paper) to distribute to prospective subscribers in 1994. The present example, from Reagh's original stock, is signed by him in the lower-right corner.