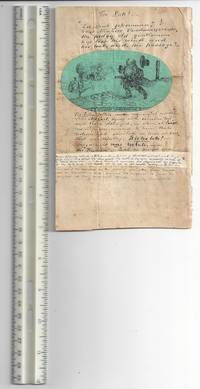 Ephemera 1776 by Major Low, fought at Lexington Green and writing about Mozart's death

Ephemera 1776 by Major Low, fought at Lexington Green and writing about Mozart's death: A rare bit of ephemera from Danvers, Massachusetts on settlement of an estate, reverse side has a brief write up on Mozart's death and his Requiem

A rare ephemera item; written in 1776 on the reverse about the transfer and sale of land for Francis Symonds of Danvers, recently departed to Amos Trask of Danvers for 105 pounds for 4 acres 'more or less'...Also, on the other side a written piece was used as a write up for Caleb Low, and an excerpt on Mozart's death titled 'Zu spat' (too late). There is also a brief write up of Major Low's participation in the battle at Lexington Green and he was one of the wounded soldiers from Danvers, Massachusetts that rushed to help save the storage of guns and gun powder that the British soldiers were hunting for on that date in Lexington, Massachusetts.

CAPTAIN FRANCIS SYMONDS was a resident of Danvers. He marched from that town to Lexington, April 19th, 1775, as Second Lieutenant of Capt Samuel Epes's Company in Colonel Pickering's Regiment. June 22nd he was commissioned a Captain in the Glover Regiment. He later served in Hitchcock's Regiment and we found a muster document saying he was in hospital. Obviously, he died. The muster document does not come along as it is a copy from a reference: New Look at Tappan History Unlocked then Unoccupied: The Tappan (or Dutch) Reformed Church at Orange-Town ...that the sick should be immediately removed to Orange-Town , and barracks be prepared at Kingsbridge with all expedition to cover the troops. George Washington, September 8, 1776