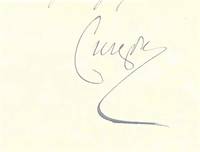 Handwritten letter, in the original envelope to Sir Evan Cotton

Handwritten letter, in the original envelope to Sir Evan Cotton

I wonder if you can send me a copy of Journal nos 43-44 of the Bengal Past and Present which is missing in my valued series & never reached me: and also if you can let me have a duplicate of Journal no 29 in which I wrote a paper about the Black Hole Monument.

It may interest you to know that in odd moments I am at work on my long promised History of Govt House Calcutta tho I do not wish any announcement made to that effect.

Curzon, George Nathaniel, Marquess Curzon of Kedleston (1859â€“1925), politician, traveller, and viceroy of India. At the time of writing, he was Foreign Secretary. In January 1924, Curzon vacated the Foreign Office and he was able to devote much of 1924 to completing one of his finest books, a study of Calcutta and the viceroys which was posthumously published under the title British Government in India; the work mentioned in this letter.

Sir Evan Cotton (1868-1939) Liberal politician, barrister, administrator, journalist, historian and writer. His Calcutta Old and New, first published in 1909, remains unsurpassed to this day. He was the son of Henry Cotton (Liberal MP) the author of 'New India, or India in Transition' who opposed Curzon's invasion of Tibet and partition of Bengal.

We hope to describe items accurately, but any purchase may be returned if it does not correspond with the description, on condition that postal arrangements for return are confirmed as soon as possible with us in advance of return.
30 day return guarantee, with full refund including original shipping costs for up to 30 days after delivery if an item arrives misdescribed or damaged.