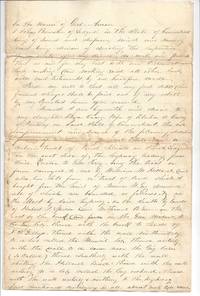 John Brewster, Honorable: 1847 Last Will and Testament a Copy

John Brewster, Honorable: 1847 Last Will and Testament a Copy

Condition
204-41/None
Seller
Calix Books
Seller rating:
This seller has earned a 5 of 5 Stars rating from Biblio customers.
Swampscott, Massachusetts

4 pages of hand written will as a copy. creasing and staining with toning and some separation but largely not affecting the text. HON. JOHN BREWSTER, now living in retirement at the old Brewster homestead in Ledyard, Conn., was born in the adjoining town of Preston, May 13, 1816, son of John and Mary (Morgan) Brewster. He is descended from the distinguished Pilgrim leader, William Brewster, "the excellent Elder of Plymouth," whose son Jonathan was the first Town Clerk of New London. Jabez Brewster, the father of John, Sr., was a native New London County farmer. He had four sons and one daughter. The latter was the wife of Jeremiah S. Halsey (deceased). John Brewster, Sr., born in Preston, December 15, 1782, died November 12, 1848, at nearly sixty-six years of age. He had been to the polls only a few days before and voted for President and Vice-President of the United States. In 1820 he bought and settled on this farm, then the Captain Israel Morgan farm. His marriage with Mary Morgan was solemnized February 6, 1806. She was born in this house, and was a daughter of Captain Israel and Elizabeth (Brewster) Morgan. Her father was a son of William Morgan and a lineal descendant of James Morgan, born in Wales in 1607, who settled in Pequot, now New London, about 1652. Captain Israel Morgan departed this life on June 4, 1816, his death being accidental, caused by choking. John, Sr., and Mary (Morgan) Brewster had three sons and a daughter, three of whom have passed away. The daughter, who married a Crary, left a family. John Brewster, the only survivor of the family, grew to manhood on this place, and here brought his bride shortly after their marriage. The farm, which is about four miles from Norwich, contains one hundred and forty acres; and he keeps from fourteen to twenty cows, besides horses, sheep, hogs, and other stock. The house is nearly two hundred years old. A new barn was built here twenty-five years ago, but about fifteen years later was struck by lightning, and with its contents was a total loss. The one now standing, which is a fine modern structure, sixty feet long by thirty wide, was built in 1891. When eighteen years old, Mr. Brewster enlisted in the Rifle Company, which was made up largely of Groton and Stonington boys; and during his six or seven years' membership he rose by regular promotion to the captaincy. He was subsequently honorably retired, and has ever since been known as Captain Brewster. In addition to carrying on his farm, during the past twenty-five years he has been a wool buyer in company with L. W. Cornell; and for the past three years he has been buyer for the Yantic Wool Company. In the capacity of appraiser, trustee, or administrator he has also often assisted in settling estates, some of them requiring the handling of large amounts of property and involving knotty and troublesome problems, of which the solution was only reached after years of anxious care. But, even with such difficulties attending his duties in such cases, he has never charged more than a nominal fee for his services. As a man of broad intelligence and sound judgment, honest, kind-hearted, and generous to a fault, he commands the esteem and confidence of the community. On April 2, 1840, Mr. Brewster was married to Miss Mary E. Williams, daughter of Dennison B. Williams, of Stonington. Mrs. Brewster, who is almost seventy-nine years old, was the eldest-born of nine children, eight of whom grew to mature years; but only two are now living, the other being her sister Eunice, wife of Richard Roberts, of Brooklyn, N.Y., twelve years younger. Five children have been born to Mr. and Mrs. Brewster; namely, a daughter who died at the age of eighteen months, John Dennison, Fanny Halsey, Phebe Esther, and Frank William. John Dennison died in 1894, aged fifty years, leaving a son and daughter: Clara Brewster, a young lady of eighteen; and Arthur Morgan Brewster, two years younger — both of whom live with their mother in Norwich. Fanny, the wife of Thomas H. Geer, of Cleveland, Ohio, has one daughter, Mary Brewster. Phebe Esther is the wife of Benjamin F. Lewis, Jr., in Norwich. Frank W. Brewster has charge of the home farm and a milk route in the villages of Poquetanock and Hallville. He married Mary Brown, daughter of L. R. and Elizabeth Brown, and has two children: Hannah Elizabeth, twelve years old; and Phoebe Esther, nine years old. Captain Brewster is a stanch Republican. He has for several years held the office of Selectman, First and Second, and has served some years as Judge and Clerk of the Probate Court. In 1860 and in 1885-86 he was a member of the Connecticut Senate. He had previously served three terms, 1847, 1851, and 1878, in the lower house of the legislature. For twelve years he was president of the Merchants' National Bank of Norwich; and he is now vice-president of the Norwich Savings Bank, being the oldest member of its Board of Directors. He was for year's president of the Henry Bell Library, but has now resigned that position. Biographical Review Volume XXVI Containing Life Sketches of Leading Citizens of New London County Connecticut Boston Biographical Review Publishing Company 1898 pgs. 371 - 372

New
A new book is a book previously not circulated to a buyer. Although a new book is typically free of any faults or defects,...[more]
fine
A book in fine condition exhibits no flaws. A fine condition book closely approaches As New condition, but may lack the...[more]