Far off the coast of California looms a harsh rock known as the island of San Nicholas. Dolphins flash in the blue waters around it, sea otter play in the vast kep beds, and sea elephants loll on the stony beaches.

Here, in the early 1800s, according to history, an Indian girl spent eighteen years alone, and this beautifully written novel is her story. It is a romantic adventure filled with drama and heartache, for not only was mere subsistence on so desolate a spot a near miracle, but Karana had to contend with the ferocious pack of wild dogs that had killed her younger brother, constantly guard against the Aleutian sea otter hunters, and maintain a precarious food supply, even when it meant battling an octopus.

More than this, it is an adventure of the spirit that will haunt the reader long after the book has been put down. Karana's quiet courage, her Indian self-reliance and acceptance of fate, transform what to many would have been a devastating ordeal into an uplifting experience. From loneliness and terror come the strength and serenity that we now long for.

In celebration of the book's 50th anniversary, this edition has a stunning new look, and an introduction by Lois Lowry, Newbery Medal-winning author of The Giver and Number the Stars. 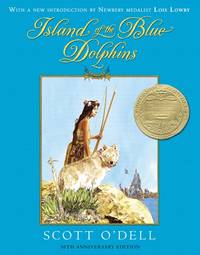 This copy of Island of the Blue Dolphins gift edition offered for sale by Ergodebooks for $12.56