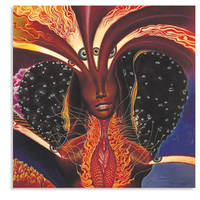 Note that postage will be recalculated once the buyers location is known! Email me for a quote at david300454@yahoo.co.uk.

If interested in buying this item, make me a reasonable offer!

Book and Records are as new; only opened to check the contents. Rare recordings by Miles Davis too!

Mati And The Music: 52 Record Covers 1955/2005 contains 52 record covers painted by Mati Klarwein. The book comes packaged with a 2xLP recording of a previously unreleased Miles Davis concert from the Copenhagen show on the 1969 European tour of Bitches Brew.

The show took place on 4 November 1969 and featured a line up of Miles Davis, Wayne Shorter, Dave Holland, Chick Corea and Jack DeJohnette.

The LP, which uses Klarwein's Zonked portrait of Betty Davis as the cover artwork is only be sold with the book


Accompanying the launch of this book is a double album
of a previously unreleased MILES DAVIS concert
that was part of his 1969 'BITCHES BREW' European tour,
with a portrait of Betty Davis on the cover.
The painting known as Zonked had been commissioned
by the trumpet player but was never used at the time,
due to their separation.
(The famous model and singer Betty Davis introduced her husband
to the funk of Sly Stone and psychedelic rock of Hendrix.
Miles Davis left her in 1969, at the time of his European tour,
later saying he thought her, 'too young and too wild' for him).

Mati Klarwein, visionary artist
Son of a Bauhaus architect and an opera singer, Mati Klar-wein was born in Germany in 1932, he grew
up in Palestine, started painting in Paris, in Fernand Léger's studio where he met Salvador Dali, then later
in the Viennese painter Ernst Fuchs' studio, he obtained French nationality with the help of Madame Malraux,
played jazz with Boris Vian before moving to New York in the mid 1960s in the middle of the hippy
revo-lution and he never stopped moving his studio across the world from India, Bali and Morocco to
Brazil, Greece, Ghana, Cuba and elsewhere, before ending up in his Balearic village of predilection, Deia,
where he passed away in March 2002.
His oeuvre consists of more than 600 paintings, including 270 portraits, 280 landscapes, which he called
Inscapes, and over 100 Improved Paintings, canvases bought at flea markets which he then adapted into
his own work.

The double album will be sold exclusively with the book.

Seller rating:
This seller has earned a 5 of 5 Stars rating from Biblio customers.
Biblio.com member since 2017
Lochwinnoch, Renfrewshire
Ask Seller a Question

I specialise in books about rock music, mainly on artists from the 70's and have several rare publications by Genesis Publications. If you have any special needs then please email me at david300454@yahoo.co.uk.

sl.
slight
morocco
Morocco is a style of leather book binding that is usually made with goatskin, as it is durable and easy to dye. (see also... [More]
New
A new book is a book previously not circulated to a buyer. Although a new book is typically free of any faults or defects, "new"... [More]