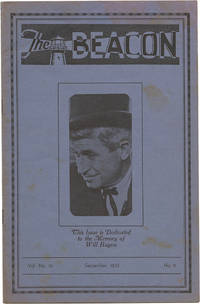 Scarce Depression-era issue of THE BEACON, a journal run by the prisoners of the Virginia State Penitentiary from 1921 to 1949. The cover, bearing a portrait of Will Rogers and caption dedicating the issue to his memory, prints the month as September, 1935 (and issue number as "9" in Volume 14); the title page, evidently in error, prints "August" (Issue 14:8). Content includes inmate-penned health, gossip, humor, and prison sports columns, notes from the chapel, news from the industrial shops, letters from prison road camps, poems, jokes, and meditations, together with an article by Commissioner of Public Welfare, official information for prisoners and their families, and a list recording "Movements of the Population" (including escapes [3] and escapees returned [8]). A poignant glimpse into an oft-forgotten population's gallows humor and efforts at mutual encouragement.

title page
A page at the front of a book which may contain the title of the book, any subtitles, the authors, contributors, editors, the...[more]
wrappers
The paper covering on the outside of a paperback.  Also see the entry for pictorial wraps, color illustrated coverings for...[more]