Home Rare Books Anthropology More Rare Books from The Book Collector ABAA, ILAB The Racial Analysis of Human Populations in Relation to Their Ethnogenesis and Some Possibilities for Estimating… 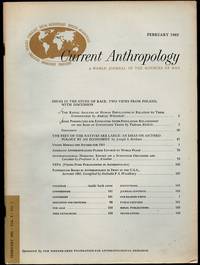 The Racial Analysis of Human Populations in Relation to Their Ethnogenesis and Some Possibilities for Estimating Inter-Population Relationship on the Basis of Continuous Traits in Current Anthropology Volume 3, Number 1

The Racial Analysis of Human Populations in Relation to Their Ethnogenesis and Some Possibilities for Estimating Inter-Population Relationship on the Basis of Continuous Traits in Current Anthropology Volume 3, Number 1

Robert Van Kemper's stamp to some of the front wrappers. Some light edge wear with some corners bumped. A complete set shipping of this item, because of the volume, will be $250.00.

Seller rating:
This seller has earned a 5 of 5 Stars rating from Biblio customers.
Biblio.com member since 2005
Fort Worth, Texas
Ask Seller a Question

G
Good describes the average used and worn book that has all pages or leaves present. Any defects must be noted. (as defined by AB... [More]
New
A new book is a book previously not circulated to a buyer. Although a new book is typically free of any faults or defects, "new"... [More]
quarto
The term quarto is used to describe a page or book size. A printed sheet is made with four pages of text on each side, and the... [More]
wrappers
The paper covering on the outside of a paperback. Also see the entry for pictorial wraps, color illustrated coverings for... [More]