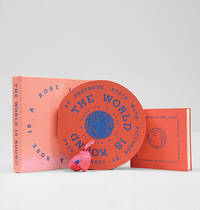 Andrew Hoyem, founder of Arion Press, owes much of his knowledge, experience, and resulting success in the printing industry to Robert Grabhorn, the surviving half of the Grabhorn Press. The two partnered in 1966 and Hoyem, having no formal training in the craft, began to acquire a solid understanding of the process and the business. Grabhorn-Hoyem specialized in typographical design, fine printing, and the publication of limited edition books. An example of the beautiful combination of these elements is their celebrated edition of Allen Ginsberg’s Howl (1971). Following Grabhorn’s death in 1973, Hoyem reformed the company as the Arion Press. Now considered one of the most accomplished printers of today, Hoyem gained total control of the press, choosing literary texts, commissioning new work from writers and artists he admires, and designing the books, including their bindings and typography. He preserved the Grabhorn’s historic collection of American metal type and has continued the traditional of high-quality bookmaking. Arion Press now has a nonprofit branch, the Grabhorn Institute, founded to help preserve and continue the use of one of the last integrated typefoundry, letterpress printing, and bookbinding facilities in the world. An exhibited artist, Hoyem occasionally includes his own drawings in Arion books, including Vladimir Nabokov’s Pale Fire, Francis Thistleton’s How I Came to be Governor of the Island of Cacona, Edwin Abbott Abbott’s Flatland, and Shakespeare’s Venus and Adonis. Hoyem is also a poet; Arion Press published two of his collections, Picture Poems and What If.

In the 1980s, Arion expanded into the genre of the livre d’artiste, producing a series of deluxe editions, the illustrations for which include Robert Motherwell’s etchings for James Joyce’s Ulysses, Jasper Johns’s etching for the poetry of Wallace Stevens, Richard Diebenkorn’s etchings for the poetry of W. B. Yeats, and Martin Puryear’s woodblock prints for Jean Toomer’s Cane. Three of these Arion editions were featured in the 1995 “A Century of Artists Books” exhibition at the Museum of Modern Art.

Hoyem purchased Mackenzie & Harris, the oldest and largest surviving typefoundry in America, in 1989. Arion and M&H are now run as a single self-sustaining business that includes publishing, typography, printing, and custom design services. In addition to its 95-plus limited-edition books, most printed by letterpress, the business now publishes three to four new books each year, in editions of 400 copies or less.

First editions from Arion Press have no additional printings listed on the copyright page.