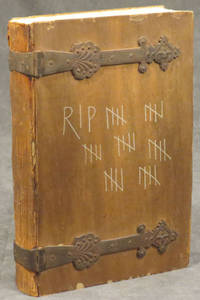 Dodd, Mead and Company was first established in New York City as the firm Taylor and Dodd. The founders of the company, Moses Woodruff Dodd and John S. Taylor, originally set out to publish religious books, with their first title published being Obligations of the World to the Bible, A Series of Lectures to Young Men (1839). In 1840, Dodd bought Taylor out of the young firm and continued to successfully publish alone for about thirty years. Dodd’s son Frank H. succeeded him in 1870. Frank H. would later be responsible for establishing The Bookman in 1895 and his work with The New International Encyclopedia in 1902, but before those successes, Dodd’s nephew Edward S. Mead became a partner in the firm. Shortly after the company was renamed Dodd and Mead, Bleecker Van Wagenen also became a partner. The firm was again renamed Dodd, Mead and Company and added a retail department in 1876.

Around this time, the company became well known for the quality of its publications, including many books on American history and contemporary literature. Early publications of popular fiction included Martha Finley’s Elsie Dinsmore and Edward P. Roe’s Barriers Burned Away. In the late 1890s, Dodd, Mead and Company introduced the work of a number of new poets including Paul Laurence Dunbar, who would become a prominent Black American poet. The firm published Dunbar’s Lyrics of Lowly Life was in 1896, followed by Poems of Cabin and Field (1899), Lyrics of the Hearthside (1899), and a novel, The Sport of the Gods (1902).

From the 1950s through the 1970s, Dodd, Mead and Company published a number of anthologies of Negro poetry, folklore, essays, stories, and humor, many of which contain contracts and permission files related to those publications. Some of the anthologies and their editors include: We Speak of Liberators (1970) and What We Must See edited by Orde Coombs, The Book of Negro Folklore (1958, 1969) edited by Arna Bontemps and Langston Hughes, 3000 Years of Black Poetry (1969) edited by Lomax and Abdul, The Book of Negro Humor (1966) edited by Langston Hughes, and The Harlem Renaissance Remembered (1972) edited by Arna Bontemps.

Dodd, Mead and Company became a subsidiary of Thomas Nelson Inc. in 1981. After changing hands a few more times, the almost 150-year-old publishing house sold its greatest assets — the U.S. rights to books by Agatha Christie and Max Brand — to the Putnam Berkley Group. The firm’s business operations were suspended in March 1989 pending the outcome of arbitration with its fulfillment house, Metro Services Inc. and by the next year, it had ceased all publications.