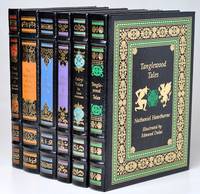 Easton Press books generally have distinctive features such as a genuine, premium leather binding, 22kt gold cover and spine lettering and decoration, specially milled acid-neutral paper, Smyth-sewn pages with gilded edges, and endsheets of moiré silk with a permanent satin ribbon page-marker. However, there is some variation between Easton collections. For instance, Masterpieces of Science Fiction books do not have moiré fabric endsheets, but have all of the other Easton traits.

Some of Easton’s books are arranged in series to which a customer can subscribe, receiving a new book every month. This can apply to collections such as The Library of Great Poetry (25 volumes), The Complete Novels of Charles Dickens (16 volumes), and C. S. Lewis’ The Chronicles of Narnia (seven volumes).

Despite working mostly in reprints, Easton Press produces several series of first editions and an occasional first edition volume; these are clearly identified as first editions typically on the spine, the title page, and the signature page.