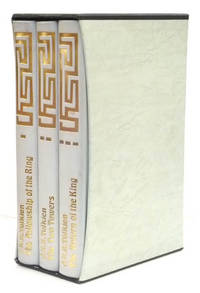 When Charles Ede, Christopher Sandford (of Golden Cockerel Press), and Alan Bott (founder of Pan Books) founded Folio Society in 1947, the goal of the firm was to produce “editions of the world’s great literature, in a format worthy of the contents, at a price within the reach of everyman.” Folio Society has been publishing beautifully crafted hardback editions of classic literature, both fiction and non-fiction, ever since. Turning timeless stories into unique objects, Folio Society books are set above the rest in almost every aspect — exceptional typography, illustration, paper, printing, and binding.

Folio Society’s first three titles were published consecutively in its first year: Tolstoy’s Tales in October of 1947, George du Maurier’s Trilby in November, and a translation of Aucassin et Nicolette, the anonymous French chantefable, in December. Thus, the firm began as a membership-based organization with a pattern of monthly publication. However, as its list of titles grew (currently publishing more than 60 titles a year, including multi-volume sets), the membership commitment was established as 4 books per year. And as of 2011, anyone is able to purchase from the Folio Society list without committing to membership, although membership remains at the core of the company’s strategy.

One of the most prized characteristics of a Folio Society book is indeed the illustration. From wood engravings to collages, painting to pen and ink, the firm commissions exceptional talent to create their highly-value visuals. Folio Society’s list of illustrators includes emerging talents such as Jonathan Burton, Jillian Tamaki, Sam Weber, and Anna and Elena Balbusso as well as seasoned masters such as Quentin Blake, Paula Rego, John Vernon Lord, and Tom Phillips.

Over the years, The Folio Society has also commissioned original introductions to its editions from leading figures in literature, the arts, media, science, philosophy and the academic world.

Folio Society first editions can be identified by “First Edition (year)” on the copyright page or by having no additional printings listed.