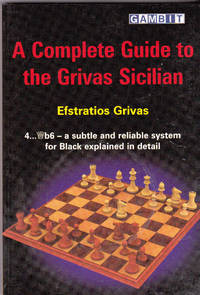 Gambit, Inc. is a publishing company dedicated to quality chess books for players of all levels. Three editors/chess players — John Nunn, Graham Burgess, and Murray Chandler — founded the London-based publisher in early 1997. Nunn and Burgess met while working for general publisher B.T. Batsford, which first introduced its own chess list in the late 1960s and had been considered the world’s leading chess book publisher for many years following. However, Burgess was unhappy with more recent developments at the firm and approached Nunn with the idea of setting up a company that exclusively published chess books. The two recognized that they lacked business management experience and decided to recruit Chandler, who was owner and managing director of the British Chess Magazine at the time.

As Gambit worked to establish a reputation in the publishing industry and develop its own list, the company undertook some work for other publishers such as Cadogan Chess (now Everyman Chess). As of 1999, Gambit has focused solely on its own books and has now published over 180 titles, eleven of which have been translated into German and five into Spanish.

Some of Gambit’s major titles include four volumes of John Watson’s Mastering the Chess Openings as well as his Secrets of Modern Chess Strategy, Karsten Müller and Frank Lamprecht’s Fundamental Chess Endings, Sam Collins’ Understanding the Chess Openings, and the new Chess Explained series by various authors. The company also published Nunn’s Understanding Chess Move by Move and Chandler’s How to Beat Your Dad at Chess, both of which were best-sellers.