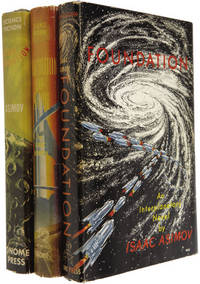 Martin L. Greenberg wanted to make science fiction and fantasy part of the modern world of publishing, a dream that would come to true — with unintended consequences. Greenberg created Gnome Press along with David Kyle in 1948. Initially, Greenberg was in charge of the business and editorial ends of the company while Kyle handled Gnome’s production and artwork, including the design of the company logo, a gnome reading a book under a toadstool. The press’ first book, The Carnelian Cube by L. Sprague de Camp and Fletcher Pratt, a hardback featuring gray cloth with red spine lettering, sold for $3.00.

Early on, the press established the Fantasy Book Club, a subscription service designed to sell Gnome publications and books from other publishers at a discount. In its first five years, Gnome published Robert Heinlein’s Sixth Column, Arthur C. Clarke’s The Sands of Mars and his Against the Fall of Night, Isaac Asimov’s I, Robot and the three volumes of the Foundation trilogy, Clifford M. Simak’s City and his Cosmic Engineers, works by L. Ron Hubbard, Jack Williamson, C. L. Moore, A. E. van Vogt, Leigh Brackett, Henry Kuttner, and Hal Clement as well as reprints of Robert E. Howard’s Conan novels.

The Gnome Press editions of Conan were the first hardcover collections of the stories, which were originally printed in the pulp magazine Weird Tales. Gnome did not publish volumes in the same order of Weird Tales, but reorganized to essentially present the stories in order of their internal chronology. Gnome produced Howard’s Conan the Conqueror in 1950, followed The Sword of Conan (1952), The Coming of Conan (1953), King Conan (1953), Conan the Barbarian (1954), Tales of Conan (1955), and The Return of Conan (1957). However, Tales of Conan is actually a volume of non-Conan Howard stories extensively rewritten as Conan by L. Sprague de Camp and The Return of Conan was not actually written by Howard.

Additionally, Gnome Press produced calendars featuring the black and white fantasy art of Hannes Bok, Edd Cartier, and Frank R. Paul. The calendars, made every year from 1949 through 1956, are now some of the scarcest items in the world of science fiction publishing. Gnome also produced a handful of issues of a newsletter titled Science Fiction World, which are now extremely rare as well. Edited by Wilson “Bob” Tucker and Robert Bloch, Science Fiction World included promos for Gnome books, interviews, and art.

Within a decade, Greenberg’s original dream began to come to life as mainstream publishers were realizing the high demand of science fiction. Doubleday started a Science Fiction Book Club in 1953, which even reprinted books that Gnome had published and was still trying to sell, but at half the price. Doubleday and other larger publishers had distribution outlets while Gnome Press relied on selling their books directly to fans by mail. Gnome, as well as other small presses, could not compete.

Greenberg struggled to keep his head above water, using problematic strategies such as not paying authors and even reprinting books without telling them. For example, Asimov claimed Gnome Press never paid him for his Foundation novels. Greenberg held out until 1962, by which point he owed his printer H. Wolff & Co. over $100,000. Many thousands of printed but unbound copies of Gnome Press books, stored at the printer until Greenberg could find money to bind them, were apparently destroyed. In its brief life, Gnome produced more than 50 books.

First editions from Gnome Press state “First Edition” on the copyright page; however, in offset reprints, the press occasionally kept the “First Edition” statement of the original publisher.