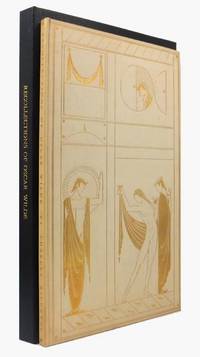 In 1922, Francis Meynell founded Nonesuch Press, along with his second wife Vera Mendel, and their mutual friend David Garnett, co-owner of Birrell & Garnett’s bookshop in Soho’s Gerrard Street. The first book published by the London-based private press was a volume of John Donne’s Love Poems was issued in May 1923.

In attempts to produce book designs with the quality of a fine-press but availability to a wider audience at lower prices, Nonesuch used a small hand press to design books, but had them printed by commercial printers, the Birmingham-based Kynoch Press. The idea seemed to catch on with the book-buying public. Nonesuch went on to design and publish 140 fine editions of poetry and literature, with the press in its prime during the 1920s-1930s. The press’s best-known editions include the collected works of William Congreve and William Wycherley and translations of Cervantes and Dante. A number of illustrated editions were also produced.

The press fared less well as the years passed, and it changed ownership a number of times. In the late 1930s-1940s, Meynell ceded control of the press, but he regained control in the next decade, thanks in part to partnership with Max Reinhardt of Bodley Head, and continued publishing through the mid-1960s. Peter Mayer, former CEO of Penguin Books, purchased Nonesuch in 2005 and has since reissued parts of The Nonesuch Dickens through his Duckworth and Overlook Press imprints.

First editions from Nonesuch Press have no additional printings indicated on the copyright page.