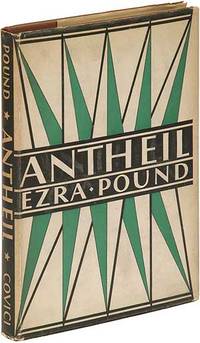 Pascal “Pat” Covici was born in Romania, but spent the later years of his childhood in Chicago. After attending both the University of Michigan and the University of Chicago, Covici’s first publishing venture began when he partnered with William “Billy” McGee in 1922. The two established a publishing company and bookstore in Chicago, which became a popular spot for writers. Covici-McGee’s first title published was Ben Hecht’s 1001 Afternoons In Chicago (1922). The memoir was labeled as obscene, resulting in its being restricted and confiscated by post office officials. Covici and McGee, along with Hecht and the book’s illustrator Wallace Smith, were arrested, pled no contest, and had to pay a fine of $1,000. McGee left the company due to health reasons a few years later.

In 1925, Covici began to publish under his own imprint, Pascal Covici, Inc. His publications include Erasmus’ In Praise of Folly, works by Richard Aldington, works by Remy de Gourmont as translated by Aldington, and translations of works by the Marquis de Sade and Joris Karl Huysmans.

Covici formed a partnership with Donald Friede in 1928. The New York City-based firm specialized in limited editions and gained much success thanks to The Front Page (1928), a play co-written by Hecht and Charles MacArthur, and Radclyffe Hall’s The Well Of Loneliness (1928). The Well of Loneliness was seized from Covici-Friede’s offices due to claims of obscenity, but the novel was cleared of any charges shortly after. Other notable Covici-Friede titles include Aldington’s Collected Poems, Mrs. Julia Moore’s The Sweet Singer of Michigan, and Wyndham Lewis’s The Childermass (though only the first of the three planned volumes was published, due to poor sales).

But with the Depression came the end of the limited edition book market. As a result, the firm was forced to publish what Friede described as “machine-made fiction,” including Bobbie Meredith’s Speakeasy Girl, George A. Bagby’s Bachelor’s Wife, and Grace Perkins’s Boy Crazy. Yet shortly after, Covici-Friede was able to return to publishing “more respectable” titles, such as Horace Gregory’s translation of The Poems of Catullus, Gene Fowler’s The Great Mouthpiece, John Strachey’s The Coming Struggle For Power, and Three Plays by Clifford Odets. In 1934, the firm signed John Steinbeck, who would become a dear and life-long friend of Corvici. Steinbeck’s Tortilla Flat was then published in 1935. However, despite the comeback, the firm collapsed due to bankruptcy. Among the last titles published by the firm were John Steinbeck’s In Dubious Battle (1936), Of Mice and Men (1937), and The Red Pony (1937).

Following the liquidation of Covici-Friede, Covici obtained the position of senior editor at Viking Press in 1938. Steinbeck followed him to Viking and the firm soon published Steinbeck’s The Grapes Of Wrath, his magnum opus, which was dedicated to Covici and received a 1940 Pulitzer Prize. In addition to Steinbeck, Covici was afforded the opportunity to work with writers such as Saul Bellow, Ludwig Bemelmans, Joseph Campbell, George Gamow, Shirley Jackson, Willy Ley, Arthur Miller, Marianne Moore, Lionel Trilling, and his own life-long friend Gene Fowler. (Bellow’s Herzog and Jackson’s We Have Always Lived In the Castle were also both dedicated to Covici.)

Covici died in October 1964. In paying his respects, Steinbeck is quoted: “Pat Covici was much more than my friend. He was my editor.”