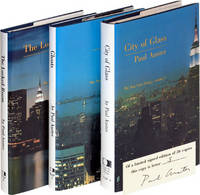 Douglas Messerli founded Sun & Moon Press (supported by the Contemporary Arts Education Project, Inc.) in 1975 with the first publication of Sun & Moon, a magazine co-edited by his longtime partner, Howard Fox. The internationally recognized journal focused on contemporary and experimental writing and art.

By the late 1970s, Sun & Moon began to publish books, its first being Djuna Barnes’ Smoke, which was a compilation of stories Messerli found in various books and magazines housed in the Library of Congress. Smoke remains on of Sun & Moon’s bestselling titles.

The press went on to publish major literary figures such as David Antin, Charles Bernstein, Paul Auster, Steve Katz, and Russell Banks. Around this time, Messerli began writing poetry himself, and in 1979, Sun & Moon published his Dinner on the Lawn (revised in 1982), followed by Some Distance, and then River to Rivet: A Manifesto, together creating the writer’s first trilogy of books of and about poetry and poetics.

Today, with over 350 titles in print — almost half of which are translated editions — Sun & Moon is the largest of Los Angeles’ 70 independent publishing houses.

First editions from Sun & Moon Press either state “First Edition” or “First Edition Published (month, year)” along with a sequence of numbers with “1” present.