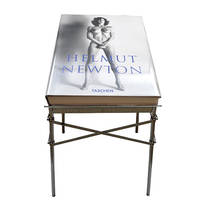 Benedikt Taschen founded his namesake company, which grew to become one of the most successful and unique publishers in the global market, when he was just eighteen years old. Taschen opened a comic book shop in 1980 in Cologne, Germany, to trade and sell his massive collection and was soon publishing catalogs to promote his wares. A few years later, he purchased 40,000 remainder copies of a René Magritte book with text only in English and resold them for a fraction of their original price. With this newfound focus of making art more accessible, Taschen began reprinting books under his own name for budget prices and soon published his first original art book, Picasso.

Taschen began establishing international subsidiaries in the late 1980s. This allowed the publisher to continue producing excellent-value art books and also afforded the opportunity to branch out into new areas such as architecture, design, photography, lifestyle, and classics.

In 1999, Taschen debuted the first of many oversized limited editions: Helmut Newton’s Sumo. This book of Newton’s most famous photographs is not only huge, measuring 20 X 27.5 inches and weighing in at 66 lbs., but also rare with just 10,000 copies produced, each signed and numbered by the photographer. The first copy of this revolutionary limited edition, which is signed by over 80 celebrities featured in the book, set the world record for the most expensive book published in the 20th century by a winning auction bid of over $320,000.

Another notable oversized limited edition from Taschen is GOAT (Greatest of All Time), a 75-pounder dedicated to the life and career of boxing legend Muhammad Ali. With over 3,000 photographs in its 800 pages, GOAT took four years to complete.

First editions from Taschen have a colophon.