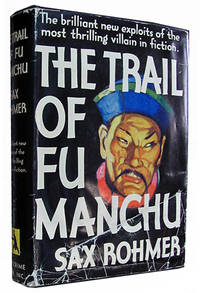 The Crime Club, Inc., an imprint of the Doubleday publishing company, was one of the best-known publishing imprints in the crime and mystery genre. The imprint’s first publication was Kay Cleaver Strahan’s The Desert Moon Mystery in 1928. By the end of its first year, Crime Club featured 27 titles in total by 9 American authors. Indeed, the imprint is responsible for first U.S. editions for many classic and popular works of detective and mystery fiction, including all 50 books of Leslie Charteris’ The Saint as well as Sax Rohmer’s Fu Manchu series.

Stories from The Crime Club were first dramatized on The Eno Crime Club, a detective series broadcast on CBS from February 1931 to December 1932. Adaptations from the Doubleday imprint returned on the Mutual Broadcasting System as a half-hour radio series from December 1946 until October 1947.

In 1943, longtime editor Isabelle Taylor originated the Crime Club Bullseyes, a series of symbols classifying each book. The symbols were printed on the spine and on the bound-in blurb. Among these symbols were a grinning skull that designated humor and homicide, an owl that promised suspense, and a shooting gun that suggested fast action.

Crime Club books are sought after not only for their content, but also for their unique dust jackets. With styles ranging from Art Deco to surrealist, the dust jackets were designed and colorfully illustrated by such notable names as Boris Artzybasheff, Andy Warhol, Vera Bock, Russell Patterson and Edward McNight Kauffer.

After publishing 2,492 titles, The Crime Club Inc. ceased publication in 1991.

First editions from The Crime Club Inc. state “first edition” on the copyright page with no additional printings listed.