Join us June 2–June 4, 2022 for our second virtual antiquarian book fair!
Preregister now for Biblio.live and get $10 to use at the fair.
Home Book Collecting Publishers Ticknor & Fields 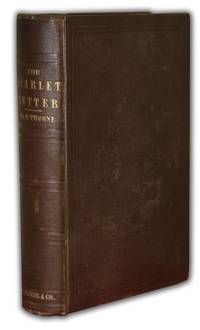 Ticknor and Fields was an American publishing company based in Boston, Massachusetts. It is perhaps best known as the publisher of Henry David Thoreau’s Walden or Life in the Woods and Nathaniel Hawthorne’s The Scarlet Letter as well as other works of prominent nineteenth century authors.

In its early years, Ticknor and Fields was exceptionally prosperous thanks to the varied, yet complimentary talents of Ticknor and Fields; Ticknor gave his attention to the financial and manufacturing departments while Fields focused on literary relations and social aspects of the business. In the 1860s, the firm purchased and printed the Atlantic Monthly and the North American Review. Ticknor and Fields compiled an impressive list of authors, Horatio Alger, Lydia Maria Child, Charles Dickens, Ralph Waldo Emerson, Oliver Wendell Holmes, Henry Wadsworth Longfellow, James Russell Lowell, Harriet Beecher Stowe, Alfred Tennyson, Mark Twain, and John Greenleaf Whittier.

In first editions published by Ticknor and Fields as well as those by Wm. D. Ticknor and Co. and Ticknor, Reed, and Fields, the same date must appear on the title page and the copyright page with no additional printings listed.