The Rubaiyat of Omar Khayyam is said to be one of the ten best known poems in the world, and probably the most popular piece of Oriental literature in the Western World. 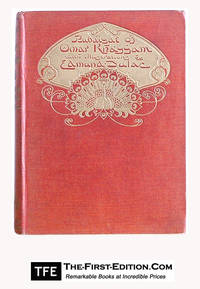 The Rubaiyat of Omar Khayyam, 1918

The Rubaiyat of Omar Khayyam is said to be one of the ten best known poems in the world, and probably the most popular piece of Oriental literature in the Western World. A number of auspicious events were necessary for this phenomenon to occur.

If Edward Cowell hadn’t been able to interest Edward Fitzgerald in the study of the Persian language in 1852 and brought to Fitzgerald’s notice in 1856 a Persian manuscript in the Bodleian Library at Oxford, then Fitzgerald would not have translated these “Epicurean tetrastichs by a Persian of the eleventh century”. If Edward Fitzgerald himself hadn’t persevered, after being rejected by Fraser’s Magazine, and paid to have his first translated version of 75 quatrains published, it probably would have been no more than a scholarly exercise.

If, after publication in 1859 by London bookseller Bernard Quaritch, Whitley Stokes hadn’t later passed by Quaritch’s bookshop and plucked a copy from the “penny box”, Fitzgerald’s book would have died on Picadilly Street. If Whitley Stokes, well-known as a Celtic scholar, had not given a copy of Fitzgerald’s Rubaiyat to his friend Dante Rossetti on the 10th of July, 1861, then the translation would not have been introduced to the influential literati of the day. It passed from Rossetti to Charles Swinburne to George Meredith to William Morris to Edward Burne-Jones to John Ruskin to the Brownings and on and on, even to America. These romantic verses kept gaining in popularity, necessitating more and more editions to be printed. From the 1880’s up until WWI, hundreds of thousands of English students were forced to memorize The Rubaiyat.

Today, no one really knows how many hundreds of editions have been printed from Fitzgerald’s various translations alone, not to mention other English and foreign translations. There are a startling array of sizes, bindings, illustrations and printing materials. With the exception of the Bible and Shakespeare’s collective works, the Rubaiyat must be the most printed book in the world. 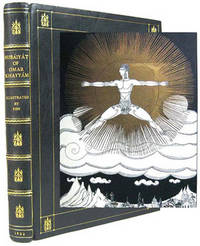 1922 First Edition of the Rubaiyat of Omar Khayyam

The most common editions are based on the four versions of translation by Fitzgerald. The first edition consisted of 75 quatrains (stanzas); the second edition (1868) was expanded to 110 quatrains; the third (1872) and fourth (1879) editions had 101 quatrains. The variations between the third and fourth editions consist of 17 words and 18 punctuation marks only. Fitzgerald’s first edition totalled only 250 copies and had paper covers, which is why a very good (VG) copy today would be valued in excess of $25,000.00.

Certainly, the most ornate edition was produced by London’s Sangorski & Sutcliffe in 1911. Folio size with an inlaid jeweled peacock binding of burgundy morocco, with jeweled clasps, and an original illuminated frontispiece on vellum. This edition was limited to 10 copies.

Many fine artists in the early 20th century took up the challenge to illustrate The Rubaiyat. Among them were Edmund Dulac, Willy Pogany, FrankBrangwyn, Elihu Vedder, Sarkis Katchadourian, Adelaide Hanscom, Gilbert James, Charles and T.H. Robinson, Arthur Syzk and Rene Bull. Special limited editions were often published first, followed by many reprints. A poem about enjoying life to the fullest with wine, women and song certainly inspired a great deal of marvelous, exotic illustration. Surely, if one were to choose one book to spend a lifetime collecting, The Rubaiyat would be that book.

Terry Stillman is the owner of Stillman Books, a converted bricks-and-mortar store that now exists only in the ethereal vapours of the World Wide Web–in other words, an online bookstore which you can find here. You can also search Stillman Books on Biblio.com. Mr. Stillman has specialized in collectible children’s and illustrated books for more than thirty years.