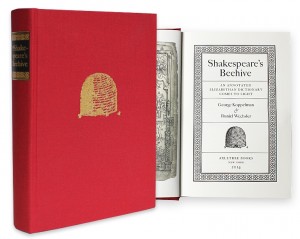 Two New York rare booksellers claim to have purchased–on Ebay, no less–an annotated dictionary that belonged to William Shakespeare. George Koppelman and Daniel Wechsler, both members of the Antiquarian Booksellers’ Association of America, the International League of Antiquarian Booksellers, and the Grolier Club, astounded the book world on April 21, 2014 with what might be the literary find of the century, or millennium.

The book, John Baret’s An Alvearie or Quadruple Dictionarie, was published in London in 1580. Koppelman and Wechsler bought in for $4,050 on Ebay in 2008, thus beginning an incredible journey. Though the dictionary is unsigned, it holds thousands of annotations in a sixteenth-century hand, including what the booksellers believe are subtle clues to Shakespeare’s writing process. It is, as the booksellers write, “A most obscure book. A humble copy. An extensive network of annotations that, through obscurity and a lack of attention, comes to light only now, never previously studied or speculated upon. These are the basic stepping-stones to providing plausibility to the dream that such a monumental discovery is possible. The rest is in the evidence.”

That evidence is presented in an illustrated account of their acquisition and subsequent research, titled Shakespeare’s Beehive: An Annotated Elizabethan Dictionary Comes to Light. At Shakespeare’s Beehive online, copies of the limited edition hardcover are $75 (seen here at left), and an e-book version is available for $15.

Rare bookseller Henry Wessells, who received an early copy of the study, posted a review on his blog, commenting, “The ordinariness of the individual annotations is, to me, precisely what argues for their authenticity: they form not a rough draft of any single text, but a tool kit.”

It has been reported that the Folger Shakespeare Library will release an official statement regarding the news later today. (Update: the Folger’s response, “Buzz or honey” was posted here.)

Some are already speculating on the seven-figure sale of the discovered dictionary.

All this came just in time for Shakespeare’s 450th birthday on Wednesday, April 23.

Check out other collectible works by The Bard.