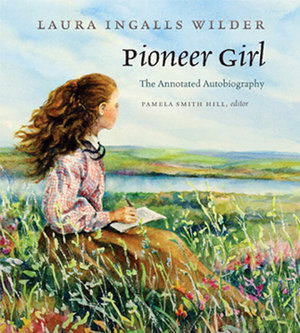 Laura Ingalls Wilder Memoir to be Published this Fall

A previously unpublished memoir by beloved children’s author Laura Ingalls Wilder will see the light of day this fall. “Pioneer Girl,” which was rejected by publishers during Wilder’s lifetime, will be published in September by the South Dakota Historical Society. The memoir includes a variety of episodes from Wilder’s girlhood on the American frontier that she considered inappropriate for inclusion in her bestselling children’s novels.

“Pioneer Girl” was written by Wilder in 1930, a full two years before the publication of the first of her “Little House” books. Wilder’s chronicle of her pioneer family’s journey through the Upper Midwest in the late 19th century failed to attract a publisher. Wilder re-worked the memoir into a series of children’s books, which were picked up by Harper & Brothers. The first novel, “Little House in the Big Woods,” was published in 1932. In the next eleven years, six more “Little House” books, as well as “Farmer Boy” were released to critical and popular acclaim. Over 80 years later, the books remain bestsellers and continue to attract new and devoted fans and collectors.

The publication of “Pioneer Girl” this fall will include significant annotations from Wilder biographer Pamela Smith Hill, comparing the memoir and her novels with facts about Wilder’s early life.