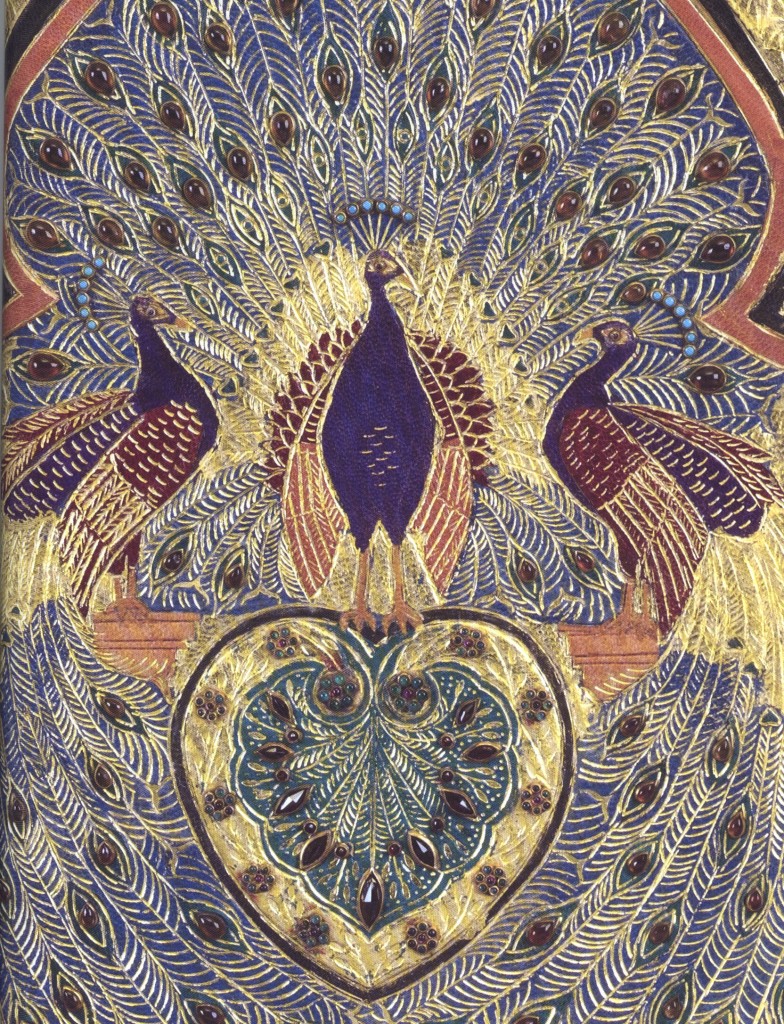 The practice of binding books with exquisite jeweled bindings was popular in the Middle Ages, but Sangorski & Sutcliffe resurrected the craft. Their books were bound in intricately inlaid multicolored leather, and often set with real gold, jewels, and semi-precious stones.

Their most famous work was The Great Omar – a copy of The Rubáiyát of Omar Khayyám commissioned by Sotherans Bookshop, where he indicated that the cost of the book was not to be a consideration. With that carte blanche, they outdid all previous efforts. Sangorski & Sutcliffe worked for two and a half years to create a sumptuous binding containing over a thousand jewels. The front cover was adorned with three golden peacocks, their tails made of inlaid jewels and gold, as were the vines winding around them.

When the book was finally completed in 1911, it was listed for sale at £1,000 and shipped to New York for display. The trouble began when customs demanded a heavy duty on the shipment and Sotherans refused to pay. The Great Omar was returned to England, where Sotherans had it sent to Sotheby’s auction, where it sold to an American named Gabriel Wells for £450, less than half of its initial reserve amount. The first ship scheduled to transport the Great Omar sailed without the book, so it was packed safely into the very next option, a luxury liner called the Titanic. The book went down with the ship in 1912. In a twist of fate, a distressed Sangorski drowned as he tried to rescue a drowning woman a few weeks later.

Sangorski & Sutcliffe continued successfully after the lost of Sangorski. Sutcliffe created a second copy of The Great Omar to replace the first. As soon as it was completed, it was stored in a bank vault for safety. Unfortunately, the bank, vault, and book were destroyed in the bombings of World War II.

The firm passed into the hands of Sutcliffe’s nephew, Stanley Bray, in 1936. After his retirement, Stanley created the third Great Omar to his uncle’s original specifications. This final copy lives in the British Library still today.

Sangorski & Sutcliffe still lives on as part of Shepherds bookbinding. You can learn more about their history and about The Great Omar on their site.

Amber is the current marketing coordinator at Biblio. A lifelong love of the written word brought her to Biblio and she happily spends her days talking about books and delving into the wide world of antiquarian books.

You can also find her in the garden or writing about brewing and plant adventures at Pixie’s Pocket.