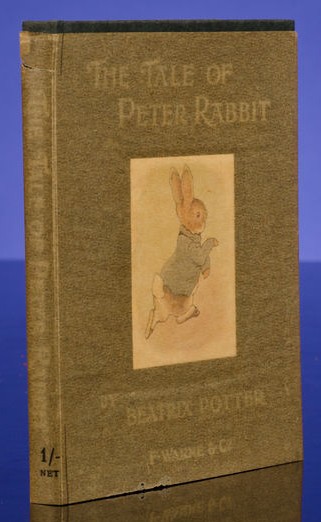 This copy of The Tale of Peter Rabbit is listed by David Brass Rare Books, Inc.

The stories of Flopsy, Mopsy, Cottontail and Peter Rabbit are beloved worldwide, and their creator mined her own childhood experiences with wildlife as inspiration. Beatrix Potter lived in a typical upper-class family in London, where governesses attended to her schooling and she interacted little with her parents, both of whom were preoccupied with their own artistic talents and social groups. Her governesses recognized her talent early, and nurtured it. Soon the young girl was drawing her own illustrations for cherished fairytales like “Cinderella” and “Sleeping Beauty.”

By the time she was eight, Potter, a budding naturalist, was filling sketchbooks with drawings of plants and animals. She and her younger brother Bertram would observe creatures in their natural habitat and smuggle hedgehogs, frogs and rabbits into their house for further examination. These later became household pets, a habit that would continue into adulthood. As a mostly self-taught student when she was enrolled in courses at the National Art Training School, she found rendering images of plants and vases too stiff and restricting. Potter returned to her roots and dedicated herself to studying and drawing plant and animal specimens at London’s Natural History Museum.

While exploring the scientific world of the animal kingdom, Potter began corresponding with the children of Anne Moore, her former governess.  Peter Rabbit first appeared in these charming illustrated letters. She used these early sketches to draft her stories of the cunning creature. (Since she did not keep copies for herself, Potter asked Moore’s son if she could borrow the letters she had sent him in order to copy them.)

Earlier this week, Sotheby’s auctioned an array of fine books, manuscripts, and illustrations that included many works by notable British children’s book authors such as A.A. Milne and J.K Rowling. Among the items up for bid were seven lots of Potter papers, letters and books. Lot 252 included thirty first editions in their original pictorial boards and included stories like The Tale of Peter Rabbit, The Tale of Jemima Puddle-Duck and The Tale of Tom Kitten. The auction house had valued it between $10,000 and $15,000. The hammer price was $43,750, an impressive rabbit to pull out of any hat.