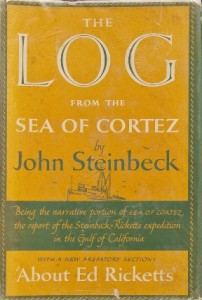 The Log from the Sea of Cortez by Steinbeck

In 1940, John Steinbeck and his marine biologist friend, Ed Ricketts, chartered a wooden fishing boat and launched an expedition into the Sea of Cortez (also known as the Gulf of California). Steinbeck later published his journal from that trip as “The Log from the Sea of Cortez,” which has since become a minor classic and one of the more important works in Steinbeck’s oeuvre.

The boat from that expedition – called “The Western Flyer” – now rests in a state of gradual decay in Port Townsend, Washington, largely unknown to the tourists who pass through the town. The boat is unmarketed by the local tourism department and isn’t much of a site anyway, covered with mud and rust. But now the Western Flyer is at the center of a new controversy:

The New York Times reported on Sunday that the owner of The Western Flyer, Garry Kehoe, a California businessman, plans to have the boat shipped to Salinas, California soon, where he will install it in a new boutique hotel. The nephew of the boat’s pilot during the Steinbeck / Ricketts expedition, Robert Enea, is fiercely critical of the plan, calling for its return to Monterey instead. The Western Flyer was employed as a sardine boat in the Monterey area for much of its life. Enea would like the boat to installed as part of an environmental education exhibit in Monterey, where it would be freely available to the public. Enea has launched a nonprofit group, called The Western Flyer Project, to help make this a reality. For his part, however, Kehoe has a compelling counterargument.  He is willing to invest the significant amount of money needed to restore the boat and make it seaworthy again. And he pointed out that The Western Flyer will be the centerpiece of a boutique hotel in Salinas, California, a town more in need of tourism dollars than wealthy Monterey.

In the meantime, The Western Flyer sleepily awaits its future orders in Port Townsend, attracting the occasional Steinbeck tourist excited to see a relic of an expedition that was so important to Steinbeck’s philosophy.

Click to view A Treasure of a Pirate Book.