Soboroff, whose collection was profiled in our winter 2015 issue, said he felt “incredibly fortunate and honored” to add Angelou’s typewriter to his renowned collection, which numbers 33 now and focuses on typewriters owned by people who have appeared on the cover of Time magazine, including Ernest Hemingway, John Updike, and Truman Capote. His collection is on view at the Paley Center for Media in Beverly Hills.

The weekend auction, run by Laster’s Fine Art & Antiques, was, incidentally, a hot topic on Friday afternoon when alarms were raised that Angelou’s books were being sold without having been catalogued. Oprah Winfrey apparently bought the core library, but the remaining books were scattered to the winds. Jeremy Dibbell has more on that in his weekly post at PhiloBiblos. 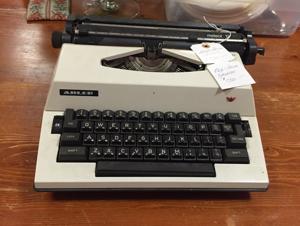 Copies of “I Know Why the Caged Bird Sings”