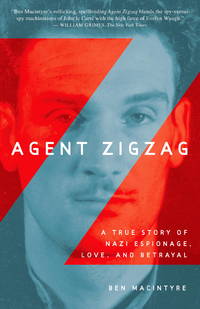 Eddie Chapman was a charming criminal, a con man, and a philanderer. He was also one of the most remarkable double agents Britain has ever produced. Inside the traitor was a man of loyalty; inside the villain was a hero. The problem for Chapman, his spymasters, and his lovers was to know where one persona ended and the other began.In 1941, after training as a German spy in occupied France, Chapman was parachuted into Britain with a revolver, a wireless, and a cyanide pill, with orders from the Abwehr to blow up an airplane factory. Instead, he contacted MI5, the British Secret Service. For the next four years, Chapman worked as a double agent, a lone British spy at the heart of the German Secret Service who at one time volunteered to assassinate Hitler for his countrymen. Crisscrossing Europe under different names, all the while weaving plans, spreading disinformation, and, miraculously, keeping his stories straight under intense interrogation, he even managed to gain some profit and seduce beautiful women along the way.The Nazis feted Chapman as a hero and awarded him the Iron Cross. In Britain, he was pardoned for his crimes, becoming the only wartime agent to be thus rewarded. Both countries provided for the mother of his child and his mistress. Sixty years after the end of the war, and ten years after Chapman's death, MI5 has now declassified all of Chapman's files, releasing more than 1,800 pages of top secret material and allowing the full story of Agent Zigzag to be told for the first time.A gripping story of loyalty, love, and treachery, Agent Zigzag offers a unique glimpse into the psychology of espionage, with its thin and shifting line between fidelity and betrayal.From the Hardcover edition.

We ship media mail or expedited if requested, typically within 24 hours.

Seller rating:
This seller has earned a 4 of 5 Stars rating from Biblio customers.
Biblio.com member since: 2006
Memphis, Tennessee
Ask Seller a Question

Burke's Book Store has been an independent book seller since 1875, selling new and used books.

Bumps
Indicates that the affected part of the book has been impacted in such a way so as to cause a flattening, indention, or light...[more]
Fair
is a worn book that has complete text pages (including those with maps or plates) but may lack endpapers, half-title, etc....[more]
edges
The collective of the top, fore and bottom edges of the text block of the book, being that part of the edges of the pages of a...[more]