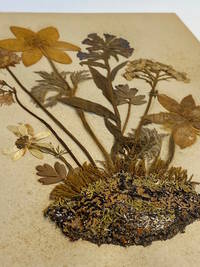 Pontresina, Switzerland: M. Caviezel, 1880. Very good. Large oblong 8vo. (230 x 190 mm). Altogether 12 leaves: 6 leaves with flower and plant identifications in manuscript, and 6 leaves with altogether 41 pasted-on pressed flowers (see below), each protected by original tissue guards. Original red cloth (a trifle worn), both covers embossed in blind, upper cover gilt with the title "Flora de la Suisse," cream-colored moire pastedowns and endpapers, inner hinges of red cloth (stained along lower hinge, affecting rear pastedown and endpaper in gutter, not affecting plates, text, or tissue guards. Preserved in a red cloth protective case. THE DIMENSIONALITY AND NATURALISM OF THE PRESSED FLOWERS AND PLANTS IN THIS ALBUM IS REMARKABLE, and stretches our conception of the 19th-century book as a physical object. Here the 41 specimens are arranged as BOUQUETS that emanate from actual MOSSY TURF. Thus, the present "book" is not only a vehicle for transmitting information in manuscript (scientific names of Swiss Alpine plants and flowers) but it contains the actual physical specimens themselves. The names in manuscript appear on sheets opposite the specimens they describe; there is faint offsetting from the arrangements which makes the handwriting both ghostlike and luminous. As the plants and flowers are arranged like paintings, this particular volume represents a kind of continuum between the realms of art, botany, and bibliography. The name of the compiler of the present album, Michael Caviezel, is stamped on the verso of the front binder's blank: "Alpen-Pflanzen M. Caviezel, Pontresina, Engadine Schweiz (i.e. in Pontresina in the Engadine Valley of Switzerland). Caviezel was a teacher and forest warden, and promoted the area's rich flora to tourists, offering guides, bouquets, presses for drying specimens, and luxurious albums -- as here. We have seen other albums by Caviezel but they were marred by boring presentation; unsightly foxing; and defective specimens or missing specimens. MUST BE SEEN TO BE FULLY APPRECIATED.

Cloth
"Cloth-bound" generally refers to a hardcover book with cloth covering the outside of the book covers. The cloth is stretched...[more]
hinge
The portion of the book closest to the spine that allows the book to be opened and closed.
gutter
The inside margin of a book, connecting the pages to the joints near the binding.
gilt
The decorative application of gold or gold coloring to a portion of a book on the spine, edges of the text block, or an inlay in...[more]
leaves
Very generally, "leaves" refers to the pages of a book, as in the common phrase, "loose-leaf pages." A leaf is a single sheet...[more]
verso
The page bound on the left side of a book, opposite to the recto page.